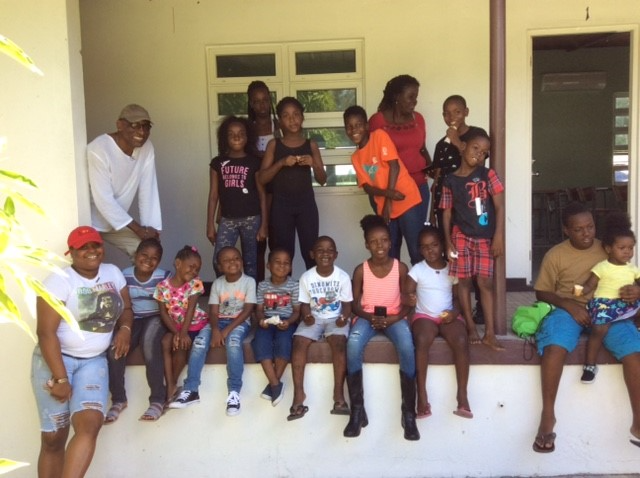 It occurs to me that I’ve never really written about the Cushion Club here on my Jhohadli blog (which is about my writing and professional journey, and whatever else I feel like talking about) – though I’ve written on it many times on the Wadadli Youth Pen Prize blog (the platform for the programme I started in 2004 to nurture and showcase the literary arts in Antigua and Barbuda, and a literary hub for our islands) and on Antiguanice.com (which continues to generously share its online real estate with community projects like ours), not to mention the reading club’s media updates. But there are some new developments I wanted to share and it feels about time that I did some of the sharing over here as Cushion Club was for many years second only to Wadadli Pen as my primary volunteer project – and though I am no longer a regular reader, I am a Cushion Clubber for life. 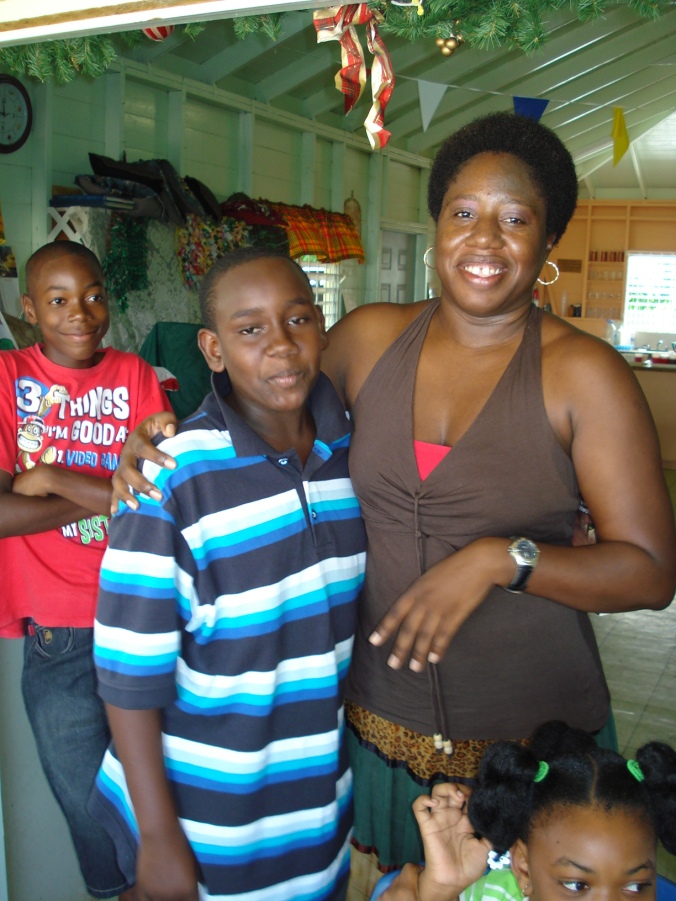 The Club started in the late 1990s, let’s say 97, and it has moved around a lot in the years since and the volunteers have changed (Barbara Arrindell, Joanne Massiah, among the volunteers in the early years) and changed again (Teacher Elizee, Daydre, Asha, Ina, etc.) over time (not to mention the very guest readers we would invite in), but it is still providing reading adventures for children – still Saturdays (10:30 a.m. – 12 noon), currently out of the UWI Open Campus (Antigua and Barbuda).

Caption: some of our visitors and volunteers through the years. 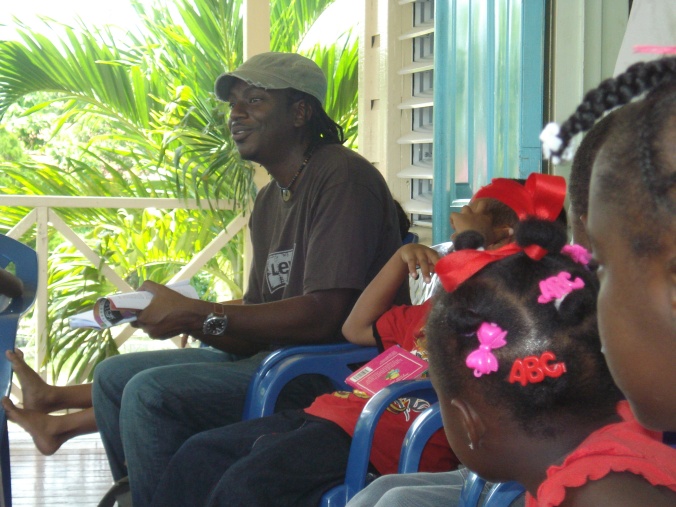 Cushion Club (one of the early volunteers, Ms. Henry with the kids including one of my nieces pictured far right); 2004. 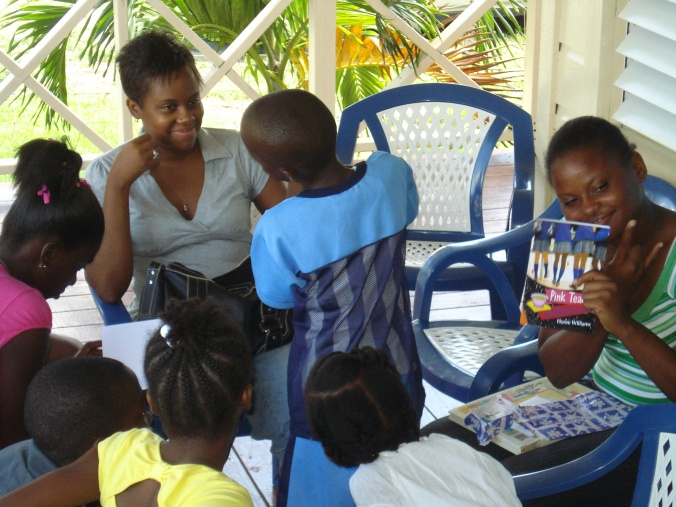 I became a volunteer, probably around 2003, I really wasn’t keeping count but I’m 98 percent sure it was before I launched Wadadli Pen as I remember running Wadadli Pen writing workshops out of the Cushion Club space when we were still at the Senior Centre in Gambles. It wasn’t always easy – there were Saturdays when I had to work, or chauffeur my niece or my mom, or go to a class I was taking (which was tricky especially as parents rarely picked their kids up on time) – but I stuck with it for many years (about 10 give or take), long enough that I saw kids I met in primary school grow up. I remember reading Jane Eyre (?) my first few weeks with Desonee who was in primary school at the time and is now a teacher. Crazy.

Cushion Club, Zuri and Zoe, 2004 – one of these is in college and one is in law school.

Cushion Club, 2006 with Velonie (one of my nieces), Shonell, and Latisha.

Another of my early kids Latisha is now a volunteer herself – and a recent university graduate – who is very much about the branding, and has set the Club up with a social media presence – here and here. And she has other plans. I like the new energy coming in to the Club to support the work being done by our most consistent volunteer from the Club’s earliest years to present Cedric Holder. It is Cedric who has expanded what the Club does – the field trips (from field trips to visiting other reading clubs to attending spelling bees and lit fest type events), the give back (sponsoring a humanities prize for Buckley’s Primary, a summer read challenge prize collabo with Wadadli Pen, a prize for the junior section of Wadadli Pen Challenge in the Club’s name for instance), among other things.

But as I was reminded on my most recent visit, it’s kids in a space, listening and reading, and playing word games (I used to enjoy re-purposing games from my own childhood such as Concentration and Red Light Green Light into word games for the kids, and the kids always loved our spelling and social studies/current events competitions) – we always tried to make it fun. And, of course, reading to them with the vigour (and many voices) I did at home with my niece, helped me get more comfortable with public reading because there’s no self-consciousness, only a desire to make the story come alive for them. And I’ve said before that I tested the story that would become my picture book Lost! A Caribbean Sea Adventure out on the Club kids – plus one of the schools I visited – but I remember specifically asking the Club kids what they thought of it. Their response helped.

At the Spelling Bee with one of my nieces (right) and one of my Cushion Club kids, 2009.

So they have helped me as I have helped them. It’s actually heart-filling when I run in to them as young adults – like how are they so grown.  But then my own nieces and nephews whom I used to take to the Club with me (some of them pictured above) are also now grown so it makes sense. I have learned that mentorship chooses you more than you choose it, and so I embrace the ones who see me as their mentor, auntie, big sister, whatever they want to call me – and thank whatever spirit led me to volunteer with the Club for the opportunity to serve. I still serve though I’m not a Club regular anymore – mostly I’m the one who does the media announcements and keeps up with the Club correspondence, that sort of thing (the club email by the way is cushionclub@yahoo.com).

Cushion Club, 2008…sharing this one because that’s another of my nephews in my arms…speaking of grown, he’s getting ready to enter secondary school soon.

Recently, the Club had a visitor (Mags) who found us – actually I’m not sure how she found us but on the eve of her visit to the island she offered to get some books for us (we’re always reaching out for fresh and interesting kid friendly books) and to stop by (we always love having fresh faces, visiting or volunteering as a regular). She’s not the first to reach out to us this way but it’s her email after her visit (plus Latisha’s recent efforts on social media) that prompted this Cushion Club post. She wrote:

I just wanted to say a big thank you to you for my visit to the Cushion Club yesterday.

I thoroughly enjoyed the morning, meeting you all and learning all about the club.

What a fantastic service you are providing for the children. I was amazed, The Cushion Club is so much more than a reading club. In addition to all the information and knowledge you are passing over in a fun way, you are also teaching invaluable life skills.

A special thank you to all the children, to you and to Latisha, you made me feel so welcome.

Thank you, Mags, for visiting and also for affirming the work of the Club. Cedric, a National Youth Award winner for his service to the Cushion Club, is doing God’s work with his persistent commitment – even now that his own son (who was a wee one when I started volunteering) is grown and graduated from secondary school (and there’s no reason for him to still be as committed as he is…but he is. And what Mags described is exactly what the Club has been about all these years, and newest regular volunteer Latisha is one of the best examples of that.

As a Cushion Club volunteer, Cedric is invited from time to time to volunteer read at lit events and schools.