The title tag is not a descriptor of the author, though it could be, but of this interview which I proposed to Sharma on a whim while congratulating her for making the 2020 Commonwealth Short story short list (again – she was previously a short and long lister, respectively, in 2018 and 2019), after recently winning another Bocas prize, the 2019 Johnson and Amoy Achong Caribbean Writers Prize for emerging writers; plus medaling at the National Independence Festival of Creative Arts and winning the 2020 Frank Collymore Literary Endowment in Barbados where she lives and works as a lawyer. Sharma is originally from Jamaica. Our paths have crossed a couple of times, both times in Barbados, once when she participated in a workshop I co-facilitated at the BIM Lit Fest (2016) and another time when we were both participants in a Commonwealth Writers sponsored workshop (2018). Sharma is clearly soaring right now but I was able to grab hold of her for a few questions – and I decided to keep it short and sweet. 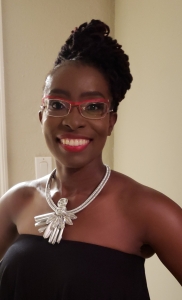 Joanne C. Hillhouse: When did you start writing?

Sharma Taylor: I was always a voracious reader as a kid. My mum would take me to the supermarket near our house where there were books displayed on a stand near the check-out counter. And instead of asking her to buy me candy or snacks or toys, I would be begging her to buy me books. She used to tell me sometimes jokingly: “Sharma, I can’t take you to the supermarket! To buy your books I’ll have to put back the rice!” But my mother was a primary school teacher who loved education, so she never had the heart to deny me a book. We had quite a library of books at home, including the World Book encyclopedia.

Being a reader meant I fell in love with words and writing and wanted to create these worlds myself.

I’ve been writing stories from childhood, but nothing that I shared with anyone. I started taking writing more seriously in high school. When I was 16, I enrolled in a fiction course with the late great Trinidadian writer Wayne Brown, who was living in Jamaica. He edited the Jamaica Observer’s literary arts magazine. I won 2nd place in the Jamaica Observer’s writing contest for a story about a man working in a slaughterhouse who comes to see his affinity with the cows he slaughters. When I enrolled in the Bachelors of Law program at UWI Cave Hill campus in 2000/2001, I did an elective course in writing with Professor Jane Bryce. Both Mr. Brown and Professor Bryce were powerful influences in my writing. However, having to read law books and write essays meant I put writing on the back burner for several years. Then  when I graduated, professional working life got in the way.

I only resumed writing about 6 years ago, in late 2013, just before I moved to Barbados to take up a job as a lawyer in a regional bank headquartered here. The genesis of this was – I had finished a PhD in law (I studied in New Zealand which was a fantastic experience), so while job hunting, I had free time on my hands. I realized I hadn’t really felt fulfilled for many years and I knew it was because I had stopped writing, so had lost a connection with myself. So I enrolled in a writing course done by Dr. Erna Brodber at the UWI Mona campus and her feedback on my work was extremely encouraging. It prompted me to resume writing.

When I returned to Barbados in early 2014, I reconnected with Professor Bryce and did her course in creative writing which was open to the public, just in time before she retired. I have come full circle! Since being in Barbados, I have had tremendous support from the National Cultural Foundation, through their literary officer and judges in their annual writing competition (NIFCA) and the local community of writers in Barbados and through Commonwealth Writers, whose Ocean Spray course in Barbados a few years ago helped me meet talented regional writers like you! J

JCH: What helped shape your writing?

(There was a question here about prizes won, the response to which, pulled from her CV, is excerpted in the preamble; but about those prizes…)

ST: I don’t have any! LOL. The truth is: I need writing. Writing helps me make sense of the world.  As the late Toni Morrison said in an interview with the Associated Press in 2012 “I need it [writing] to just stay steady emotionally…[when I’m writing] all of a sudden, the whole world is an interesting place. Everything in it was something I could use or discard. It had shape. The thing is – that’s how I live here.”

Here’s what I do that I think is helpful:

·        I am a constant reader (even while I am working on my own writing projects). I am always getting inspired by the techniques and styles of other writers (whether they are first novels or novels from accomplished writers). I get ideas from them.

·        I lean on my strengths (I am good at voice/dialect so often my stories are written in Jamaican patois).

·        I experiment with new ways of writing. I try to get outside of my own box and I’m not afraid if it fails or doesn’t work.

·        I am a constant learner- I read articles and attend workshops on writing.

·        I get feedback. I am privileged to have close writer friends and am part of writers’ groups where we share our work and get feedback (Writers’ Circle and Writers’ Ink). These supportive groups of writers let me know what works and what doesn’t.

·        And I listen to feedback and kill my darlings, even though this is often painful when you fall in love with a phrase. I also trust my instincts as to what’s not working.

JCH: What was the genesis of your winning story (meaning this year’s Commonwealth short listed story)?

ST: On the Commonwealth Writers’ website when they announced last year’s shortlist, I saw a photo of one of the 2019 Commonwealth Short Story Prize shortlisted writers and was fascinated with his prominent nose. I then wondered what my face would look like if I had his nose and how I would deal with it in the most awkward time of life when appearances matter: the teenage years.

JCH: How long have you been living in Barbados? How did that location shift come about and how has it affected your writing?

ST: I moved here 6 years ago to take up a job. It has affected my writing in that I am plugged into a network of writers and resources I wouldn’t have had access to in Jamaica. It has all been positive.

I plan to share this interview at the Wadadli Youth Pen Prize blog as well – especially for the writing and submission tips she offers but I was able to do the quickest turnaround posting it on my personal author blog, and I am delighted to add Sharma to the very limited exclusive interviews I’ve done here in my space. The only other authors I’ve run Q & A’s with on Jhohadli are Haitian-American writer M. J. Fievre and African-American writer N’Tyse – the latter part of an author blog exchange between publisher-mates. This one resonates with me in specific ways – Jamaica Observer Literary Arts to Jamaica itself to reading being an obsession and a classroom and writing being like air, so much of it. Thanks to Sharma for indulging me and continued success to her.

Quick-ish blog update: I haven’t posted for a minute on the blog, so while I’m here I’ll mention two recent updates – addition to poetry publishing credits (Grandmother and Child, Weather Patterns, and Waste Not in the UK’s Skin Deep magazine Is this the End?) on the Other Writing – Poetry page; and a new endorsement of my book Musical Youth (“absolutely brilliant”) by my former UWI professor, author-scholar Carolyn Cooper, shared with her permission, on the book’s Reviews and Endorsements page. No fresh updates to Blogger on Books since Stephen King’s The Waste Lands but lots of new content in the CREATIVE SPACE series  which is on an every other Wednesday schedule with new (as of 2020) publishing partner the Daily Observer.

3 – books I’ve read this month that have stood out for whatever reason: I haven’t finished any of these but I have been reading volume 32 of The Caribbean Writer and incidentally one of the standouts for me so far is Jane Bryce’s When It Happened – about a Caribbean under water due to climate change … and then the tsunami hits; N. K. Jemison’s speculative world in which a certain class of citizens have the power to move the earth The Fifth Season;  and Marlon James’ Black Leopard Red Wolf which has shapeshifters, witches, assassins who walk on ceilings, and a protagonist with a gifted nose. What stands out to me is that if you add the speculative fic anthology Take Us to a Better Place, without even realizing it, I seem to be using otherworlds to escape our CoVid dystopia.

2 – blog post by other bloggers you wish to share: the last other blog I read was a local blog on the subject of the dying tradition of clay pottery which featured an interview with my cousin, who is in the family business (pottery). Coincidentally one of the other books I’ve been reading is Creole Clay by Patricia Fay which explores traditional pottery making in the Caribbean and mentions my aunt and cousin and their process and even name checks me because of the pottery motif in my book Oh Gad! I shared some excerpts in my reading in bed series on my Instagram TV.

1 – One book that I hope to read next month: honestly, I just want to finish any of the books I’m reading and I would like to get back to Derry Sandy’s Greyborn Rising (another alternate reality book! this one set in the Caribbean) which I was really enjoying but which somehow slipped down the reading pile; and New Daughters of Africa which suffered a similar fate. Reading time on my short story collection in progress would be nice too.

That’s it; that’s the post. A little longer than short but hopefully still sweet.