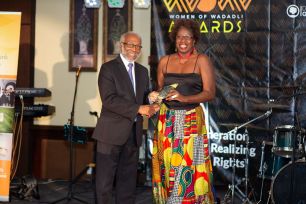 Musical Youth, subsequently published by Caribbean Reads, second placed for the inaugural Burt Award for Young Adult Caribbean Fiction [2014], second edition published [2019] after it was added to the Antigua and Barbuda schools reading list [2018] after having been on a school reading list in Trinidad and Tobago for several years

The Ministry of Health, Sports & Youth Affairs, Honourable Mention Award, “in recognition of your outstanding contribution in literary arts” [2006]

Leonard Tim Hector Memorial Award: (from the official letter)  “In keeping with Tim’s vision of the society recognizing, appreciating and rewarding its sons and daughters who have striven for and achieved excellence, the members of the LTHMC wish to commend you for your perennial and exemplary contributions to the advancement of our country, especially in areas of journalism, literary arts, and the development of our youth.” [2014]