Dancing Nude in the Moonlight (like The Boy from Willow Bend) has had two releases (2004, initial release; 2014, 10th anniversary edition) but only one launch event (July 2004). It was only my second release and a little more of an event than release one as the pictures attest. 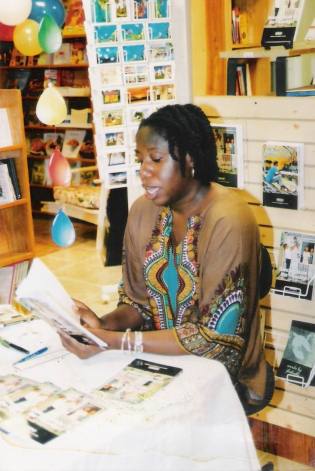 Well, okay, you can’t tell a lot from these photos but there were people there, friends, family, book lovers… this would have been one of my first readings and signings of my work (since the Willow Bend launch was such a low key affair). My advice, on reflection, is go big, there’s nothing to be gained from smalling up yourself, certainly not book sales.

This was again at the Best of Books – when they were in the British American, or was it still the Benjies mall, don’t remember. But, as noted, all my local launches have been at the Best of Books. The bookstore also hosted an event – the Moonlight Street Fair – celebrating the book, which they had selected as their summer read, in 2008. I’ll share some of those pictures here as well.

Bartender Zugan serves up his Moonlight Samba – a Dancing Nude in the Moonlight inspired drink showcased at the Moonlight Street Festival, a celebratory and promotional event organized by the Best of Books in 2008.

with Antiguan and Barbudan writers D. Gisele Isaac and Barbara Arrindell, 2008, at the Moonlight Street Fair for Dancing Nude in the Moonlight.

Dancing, a special Moonlight Samba cocktail, laughter and panel with friends, shutting down a whole city block…now that’s  more like it.

Click my books for more on this or other books by Joanne C. Hillhouse. Explore the site for other launch galleries either already posted or coming soon. But don’t take and re-use any picture posted here for any purpose without first asking.

Back to Main Appearances page.