Dolphin is an Arctic Seal. Other seals call him Dolphin because of his funny-looking nose.

“Beautiful like a bottle-nose dolphin,” says his Nema. Nema has travelled further than any other seal. She tells of adventures with sea lions in the Dominican Republican, humpback whales in Dominica, and bottle-nose dolphins near Antigua.

Dolphin, the Arctic seal, tries to picture real dolphins swimming and leaping through the water.

…Also listen to a sample of the audio book here. 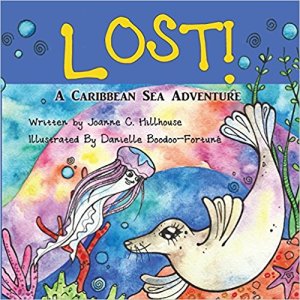 
Lost! A Caribbean Sea Adventure is not an adaptation of the story of Wadadli, an Arctic seal that similarly found its way in to the Caribbean sea; rather it is inspired by Wadadli’s journey. You can read about Wadadli’s journey here.
More of Lost! in Read2Me_TT here.