CREATIVE SPACE is an award-winning series spotlighting local (Antiguan and Barbudan/Caribbean) art and culture. As a brand, it dates back to 2009, published exclusively in LIAT’s inflight magazine. It was revamped in 2018 as a blog series and syndicated as of 2019 on Antiguanice.com. Its publishing partner, as of 2020, is the Daily Observer newspaper. It has its first print run in the paper every other Wednesday, with the online extended edition with EXTRAS running here on the blog and full interviews and extras on AntiguanWriter on YouTube. In 2021, the two–part CREATIVE SPACE mini-series on marine culture placed third in the OECS clean oceans journalists challenge. CREATIVE SPACE is created, owned, and written by Joanne C. Hillhouse – Antiguan-Barbudan/Caribbean author, journalist, producer, and freelance writer, editor, and trainer.

Here’s a link to the issue as it appeared in the Daily Observer newspaper on September 21st 2022: 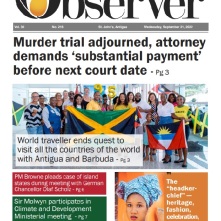 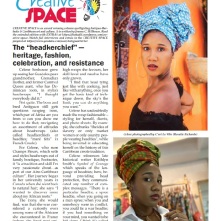 Below is the extended online edition (not a duplicate of the edition with publishing partner Observer Media) with EXTRAS.

Celene Senhouse grew up seeing her Guadeloupean grandmother, Grenadian mother, and former Carnival Queen aunt, who has Dominican roots, in stylish headwraps. “I remember looking across the church during Independence masses when I was small and even if you couldn’t see her [aunt’s] face, you saw her headtie in the distance and I would always be in awe of that… I guess it also for me ties back to Antiguan culture because for me it was always a normal thing …[my grandmother and mother] would tie my head to complete the national dress …[and] it instilled a sense of pride.”

For her it was normal. “I thought everybody did it.” Not quite. The born and bred Antiguan still gets questions ranging from, which part of Africa are you from to can you show me how to do that; navigating an assortment of attitudes about headwraps (also called headkerchiefs or headties; “maré tèts” in French Creole). Celene’s mother has owned a boutique named Footnotes for over 20 years. “When I started to notice that it might have been something special was when even way before we even started offering headties or headwraps, local women would come to the store to ask my mother to tie it for them because it seemed to be something that they wanted to get in to and do for themselves,” Celene said. But the response hasn’t always been positive. “You’re trying to be African,” some have accused.

For Celene, who runs Champs Fleurs, which sells and styles headwraps, out of Footnotes, it “is a tradition and skill I’m very passionate about,” she said, practiced and celebrated, “as part of our Afro-Caribbean culture.” Her journey began in her university years in Canada when she went back to natural hair; she says “I wanted to discover more about my African roots.”

The irony, she would find, was that she was considered a curiousity even among some of the Africans she encountered in France (where she lived post-university and where headwrapping was perceived as religious or impolite). This did not halt her journey; much like the artistically high wraps she favours, her skill level and resolve have only grown.

“I find that head tying just like with cooking, just like with anything, once you get the basic kind of technique down, the sky’s the limit, you can do anything you want,” said Celene.

She has undoubtedly made the wrap fashionable – styling for herself, clients, and photo shoots. By example, she shows head wrapping is not limited to “the idea of slavery or only market women or only country people wearing head ties”, nor specific days (Independence, Emancipation Day, Black History Month) when we’re invited to show-out culturally. That said, she is just as invested in educating herself on the history of this Caribbean creole tradition.

The Antigua and Barbuda national dress, designed by Heather Doram, whom she recently styled for her birthday shoot, and the wob dwiyèt/robe douillette of the French Caribbean are obvious reference points, as both include headties. But Celene also references late historical writer Keithlyn Smith’s Symbol of Courage which speaks of the language of headties; how, beyond providing head protection, they communicated any number of complex messages. “There is a particular headtie, a spree headtie, when you going on a man spree; when you and somebody were in conflict, you could tie a war headtie; if you had something on your mind, you wanted to be left alone, I think it’s called the talking to the heart headtie,” she said by way of examples. “It’s so interesting to me. This adornment became a whole language.”

In my conversation with Celene – during which she demonstrated her head wrapping technique on me (see video on AntiguanWriter on YouTube) – we spoke also about what’s under the wrap, hair. How the plaiting, roping, and cornrowing (congoing) of hair, much like head wrapping styles, both out of Africa, are their own lost (mostly due to colonization) language. How in French Caribbean and American colonies the Code Noir included tignon laws requiring Black women to cover their hair, but they made it stylish. How in post-slavery society, with dress hats being the preserve of “bakkra misses” (per Smith’s To Shoot Hard Labour 2), newly freed women adorned their heads in fabrics like madras, now part of the national dress. How there’s been a “resurgence” in things African – fashion to hair to headwraps – even with ongoing tension between Eurocentric and Afrocentric influences in the Black body. How even in Black spaces, these Afrocentric influences – loc’d hair on a child, for instance – remain topical for all the wrong reasons.

“It’s crazy to me in 2022, you’re saying a young child going to school cannot wear their hair in locs but we’ve seen in this day and age, lawyers, doctors, prime ministers…world leaders, who have proven that hair is hair,” Celene said.

Much like our natural hair, Celene says women – and men for that matter – should be free to wear headwrappings anywhere, even in professional spaces. “Even now, people will comment that they didn’t know headties could be work wear, they didn’t know headties could be formal wear,” Celene said. “It has made me wonder, who decides what is professional wear? Who decides what is appropriate? Especially when you have a historical or cultural context that goes with it.”

She is hopeful that with the current trending popularity of African prints and fashion, natural hair, and headties, we will continue to “explore some of the things we’ve been taught.”

Watch my full interview with Celene Senhouse and her headwrapping demonstration.

Heather Doram, headwrap styled by Celene Senhouse, pictured in this post, for an “I am a Caribbean” themed birthday shoot in July 2022. “To have a living legend – someone I’d learned about and have looked up to since I was in school, validate my skills as a headtie stylist means the world to me and gives me Celene Senhouse Champs Fleurs Headties courage to continue on my path – to continue learning more about our Antiguan and Caribbean history and culture on the whole and to share that with others,” said Celene.

In 2022, Black British actress, Oscar nominated in 2020 for playing Harriet Tubman in the eponymous biopic, Cynthia Erivo attended the Met Gala crowned in white head wrapping. The theme was gilded glamour and white tie and, unusual for such events, her reference was clearly Black women in history, at least up top. On the red carpet, she’s reported to have “disclosed that her headwrap was inspired by women of Louisiana from the 1800s, who had to cover their hair for necessity.”  That necessity being tignon laws of the 1600s and 1700s, part of the Code Noir in the French Caribbean and American colonies, requiring Black women to cover their hair, a restriction which, in time, became fashionable. Read more about Cynthia’s look in this Met Gala inspired fashion art post at Wadadli Pen. The headwrapping is credited to Nai’vasha, founder and CEO of Curl Queen Official.

Cynthia Erivo is wearing a white headtie and Celene related that she had learned via local archeologist Desley Gardner (featured in CREATIVE SPACE #18 of 2021 – Clarence House and the Complicated Landscape of our Colonial Past) that white headties were worn by Antiguan women after the abolition of slavery – there are images of them in all white going to market. Celene said, “I now see all white outfits as a symbol of our freedom. Our current window display was inspired by that.”

Read and watch one person’s brief history of the headtie.

A creative non-fiction writing exercise I did related to this headkerchief tying practice:

This is a skill that requires a sense of style and a willingness to allow instinct to lead. Letting instinct lead is only successful if you have a sense of style. Even a small bit of one will do.

You place the short end of the cloth on one side, the long side on the other, an unevenness that the body wants to fight. We are designed to appreciate symmetry. But fight it, fight the conditioning and listen to your fingers, they know what to do. The body remembers, not just the whip, not just the slave ship, but the customs and teachings of home. How to turn fungee, how to cornrow hair, how to wrap a head in a language that those like you, also of your community, can read.

The tie for romance, the tie for war, the tie for sadness, the tie for salaciousness; we know it all. Just listen to yourself. And ‘llow the long end to drop, then drape it over the short end, in a V. Wrap the head. Build up. High as you like. It’s your crown. Let it stand, threading in other cloth as you like. You’ve got style and you know it. Now, strut, Queen.

If you would like to be featured in a future CREATIVE SPACE or to pay for a (web only) advertisement or sponsored post  (on jhohadli.wordpress.com exclusively), BOOSTing your BRAND while boosting Antigua-Barbuda Art and Culture, contact Joanne. Contact me also to explore advertising options.