Sponsored by the Spirit of Carnival! 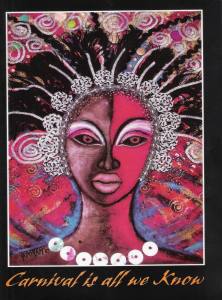 A friend just gave me a bellyful laugh when he remarked that he looked forward to seeing my troupe on the road again this year. If you’ve been here before, you’ve read about Grace’s Merrymakers inspired by the tree faerie from my children’s picture book, late 2016 release With Grace.

It wasn’t meant to be the birth of Antigua’s new mas dynasty but the 60th anniversary of Carnival in 2017 gave me and some friends who love mas the opportunity to try doing our own thing. And so I laughed – though the Mas sub-committee had already reached out to remind me to re-up my registration –  because not me and that again (at least not right now, but never say never after all I do have a couple of picture book characters who haven’t hit the road yet). Don’t get me wrong, I’m glad I did it (for the time with my girls, just us three, as much as the return to mas which I hadn’t played in a minute – as I discuss in this essay in Moko: Caribbean Arts and Letters) but mas is so much more fun when you don’t have to worry about all the behind-the-scenes stuff – I have new-found respect for any of the leaders of mas I’ve played with over the years who managed to wrangle all the moving parts, including literally hundreds, sometimes thousands, without looking harassed.

Carnival, Antigua and Barbuda’s Carnival, is a weird hybrid of culture and commerce. When it launched in 1957, it was a tourism low season event that re-focused, some would say leached, the creative energy that used to be put in to the Christmas masquerade – a mas of john bulls and long ghosts and more – or so the mythology goes. In doing so, it also intersected with, some would say overtook, the Emancipation Day, August Monday, observation. To this day, the tension between the cultural and artistic value of Carnival (artists creating music, costumes et al, celebrating freedom and self) and its value as a financial investment (event tourism, domestic economic stimulus) remain in tug-o-war. Every year it creates bacchanal. Some of the headlines so far this year have focused on the pre-season fetes, to be taxed or not to be taxed; on pan, how practical is it to acquiesce to the demands of the association re the staging of panorama in order to enhance the quality of the sound; on the parade route, hew with tradition and jam down Scotch Row or take it out of town and give the revelers more room to wild out; on the programme itself, as Calypso steps in to the sunset like an ailing grandparent who the young ones find charming but not as intoxicating as soca

– yep, Soca by way of Party Monarch, has won the battle for Carnival Sunday Night (it’s been a long time coming: from the Party Monarch’s slow grind to relevancy to its explosion as the biggest draw of the season, to this, and Calypso didn’t even really put up a fight).

At heart, these headlines point to questions like what is Carnival really about, to whom does it belong, who is it for, and why does it matter? For some the answers are easy – it’s an expression of our creative selves and a celebration of our cultural identity, it belongs to the people, it is for the people, and it matters because our core creative selves matter.  As Short Shirt sang back in the day, “we are the ones”, right? But idealism aside, with corporate branding and government management, and a reported $7 million owed to individuals and service providers involved in previous Carnivals making news at this writing, it’s never been purely about the art – in fact, at times, depending on which chairman, minister, or administration happens to be at the helm, there can even be a sense that some shows which have artistic value while not being huge draws, have to justify their very place in the line-up as a financial concern. Some, like pan, which the government says has given what amounts to an ultimatum to press for certain changes to the stage to improve the quality of sound on panorama night, changes which the government deems logistically and financially impractical and unnecessary, as it hasn’t hindered the upward trend in crowd turnout, have fought their way back to centre stage from the very edges of Carnival (there was a five year panorama timeout, 1996 to 2000, the longest break since the first panorama in 1949; and the youthful energy through schools of pans and pan showcases like Moods of Pan are credited with reviving interest in its return).

Even the schedule shuffle was justified along economic, i.e. the economic value of Carnival as entertainment, lines when Culture Minister Daryl Matthew was quoted as saying, “(the change) gives someone who may be visiting Antigua & Barbuda for Carnival an opportunity to be partying all day, all night from the time they land on Thursday right down until Last Lap.”

The changes certainly seem rational (with the arguable exception of children’s Carnival falling in the middle of the work week). Art isn’t always rational though. It’s a soul connection, a calling of the spirit. And some of these changes, even some that can be attributed to time, shifting generational tastes, and good financial sense won’t sit easy on the spirit. Whatever the case, the Carnival will go on and next year there’ll be some other bacchanal in the build-up. But it would be lovely if it felt like we had a long term vision for Carnival (and maybe we do) that balanced these sensibilities, the artistic and cultural value, the commercial aspect and the event’s profitability – and within that a recognition that yes, Carnival must pay its way, justify its existence, but art is not purely commerce. It is something deep in the soul that finds expression in music, mas, and more, and, impractical though it and artists sensibilities can seem, Carnival wouldn’t exist without it. Or it might but as a confetti-like concoction (some argue it already is) that captures nothing of the character of the people and the country, and not even a shade of what made it at one time, without exaggeration, the Caribbean’s greatest summer festival.

The ‘sponsor ad’, which is actually the cover of a special publication on Carnival arts that I had the pleasure and privilege of pitching and editing for Observer Media Group to mark the 50th anniversary of Carnival. It was a newspaper supplement featuring all the arts that contribute to the making of Carnival as well as art inspired by Carnival. The cover image is a Heather Doram painting. To have your real sponsor ad in that space, contact me.

Halcyon Steel Orchestra performing the Monarch King Short Shirt’s We are the Ones (the man himself joins them during the performance), an old calypso tune that proves the issues around Carnival are not new ones, with lines reminding the powers that be that the artists are the heart and soul of Carnival, “still you treating calypsonians and pan men like dirt/gi we wha we worth”. The sponsor banner is emblematic of the corporate money and branding that is now as visual a part of Carnival as the costumes – more so, some might say.

The 2018 Carnival programme which was commendably out early though that’s in part a nod to the fact that Carnival is starting earlier and earlier – even the Queen show, once an event highlight is now, in recent years, part of the pre-season (mark the date).

This sponsored post is part of the online edition of my culture-and-arts-focused CREATIVE SPACE series. As a journalist in Antigua and Barbuda for many years, it has been one of my favourite beats. Our culture and the arts don’t get covered nearly enough for me, and, as I have a platform I’m going to use it to expand that coverage. That’s why I’m doing this. I’m hoping that companies in Antigua and Barbuda will see both the online marketing potential in terms of their brand and the value in supporting Antiguan and Barbudan art and culture by sponsoring a post in this CREATIVE SPACE series. Boosting your brand while boosting local art and culture. Posts are syndicated on Antigua Nice, one of Antigua and Barbuda’s first and largest online platforms. More to come. If you wish to support Antiguan and Barbudan art and culture while advertising your brand across potentially multiple online platforms, contact me.