There is a sequence in Zahra Airall’s staging of The Long Walk – an original slave/plantation era Antiguan and Barbudan play – that was so emotionally harrowing I feel some relief that I was in the dark as it squeezed tears from me. It played out like a nightmare. The other enslaved women as the chorus to her running feet and beating heart, the lighting projecting darkness and frenzy, a young mother, initially characterized as an antagonist for the way she fights everything and everyone even reality, emerged as the hero of the tale when she insisted “I am going for my daughter” – said daughter having been taken from her at birth  and sold to another plantation.

This is based on a story Airall – an Antigua Girls High School theatre arts teacher and well known writer (poet, playwright, screenwriter) and producer (one of the women behind stagings here of The Vagina Monologues, its local variation When a Woman Moans, and the now on hiatus Expressions Open Mic series) – dug up from the records at the National Archives. As to how much of the story was fictionalized in this staging a staging at once surrealist and all too real, hard to tell. But Airall did what any good writer hopes to – rope you in to the story. Rope might be an inappropriate term given that there’s a lynching early on in the story but it seems fitting for the way Makeba’s desperate sprint – three times – for her daughter tugs at your womb, whether you have one or not. This is the sequence that had me fighting tears (and wondering how the people behind me found anything to laugh at).

Their laughter is not a fault of the play which took its time building atmosphere, setting the mood, and laying out the context; and which even offered the relief of naturally humorous moments as we engaged with our uncomfortable history. So maybe the laughter was some combo of discomfort and emotional immaturity. Because the play did its work well and the audience, for the most part, seemed moved by it.

It opened with a haunting negro spiritual, pitching its sad notes (via the lovely voices of its soloists) not only from the stage but filling the room with it, insisting on your presence not just in the room but in the historical space the play occupies. The bodies laid out on the theatre floor when patrons entered had already begun the work but the singers’ voices coming from various parts of the room completed the invitation to a sombre but spirited space – or should have.

Granted there was a tonal shift given Airall’s choice of framing – a modern day custody battle between a young black mother of limited means and an unseen (all the white people were unseen but present) white father; her at once chastising and spirit-bolstering, weed smoking grandmother who served up both comic relief and gravitas; and the classist former friend (?) reminding her that she had nothing to offer the child. This modern drama book ended the story’s real drama – one could wonder, as I did, if it was necessary, seeming somewhat cliché but by the end I felt it had worked, and I credit that to the action in the middle. As the young mother slipped in to a dream haze helped by some ganja tea from her grandmother, the actors filling these roles returned in different but similar roles on the plantation – the frenemy as the house slave wielding her light skin privilege over her people, the grandmother as the slave village elder (modda), and the young mother as a…young mother.

Music and movement continued to do the work of setting the mood but also dramatizing the rhythms of life of field gangs in plantation times. 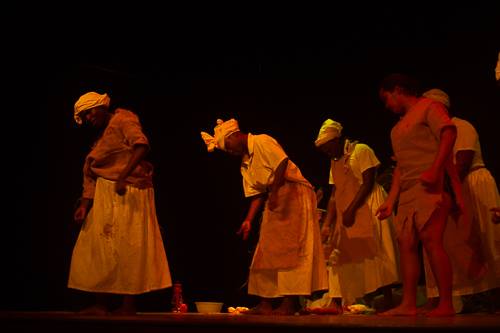 Noticeably there were no men in this particular gang or in this Africanized slave village. But there were men at the fringes of the story – a laboring mother screamed for the father of her child, and it is he who was hung, seemingly for the crime of running away presumably to be there for the birth of his child (that bit is a bit hazy for me). The child was taken, establishing that on birth, maybe not every child is taken as the play suggests, but every child could be at the owner’s discretion – or in this case, the owner surrogate, the brown skin house ‘n*gger’ as she was called by the other women in the play. And one is reminded of the ways the plantation system conspired to make us (black people) hate ourselves and each other – a condition we haven’t quite broken with several generations out from slavery (which is Airall’s point I think, at least in part, by connecting the present with the past).

Having referenced language used in the play, I do have one nitpick, I was sometimes distracted by what now and again felt like anachronisms and Americanizations of our Caribbean vernacular (e.g. the play’s pickaninny v. our pickney or pickeynearga); but this was counterbalanced by the clear effort to capture the Africanizations that surely would have been a natural part of speech back then (credit to the research); and by the dialogue, specifically, some of Makeba’s lamentations over plantation life,  which had poetic purpose that intentionally worked to lift the drama to something with fable like status.

And it is, the kind of dark but hopeful fairytale you want to tell your children: of enslaved Africans living in a world where bodies are hung like Billie Holiday’s Strange Fruit and innocent children are raped before the community can even complete the rituals of girlhood to womanhood, because, as the villainous hn reminds them they own nothing not even themselves; but who insist on just the opposite, because when you own nothing else you can own you purpose, even if that purpose is the singular insistence that “I’m going for my daughter” – though my hand be burnt in a coal pot, though I be whipped until the skin is stripped from my back and I am bloodied and weak, though I be sentenced to death by hanging. “I am going for my daughter”. I have no idea what was done in real life to the young mother who walked from Carlisle to Diamonds for her baby three times, but it is a matter of record that in the end bakkra an’ dem threw up their hands so to speak, as the court ruled that mother and child should be together – who brought the case and how and why, the play doesn’t belabor those details. Rather it makes the choice to focus on the mother’s determination against the odds for, as I opened, an emotionally harrowing and ultimately triumphant sequence. On the strength of this sequence that had me fighting tears, I say well done, Zahra.

Additional nitpicks if I were inclined would be prop pieces like the hanging man that could have been better designed and executed (but that’s likely an issue of funding), and the too sharp contrast between house and field slaves. On the latter point, to the play’s credit it tries to hint at the nuance, e.g. when the headkerchief is pulled from the house slave’s head during a fight and we – audience and actors – are frozen in a moment of reflection that their realities are not that different after all.

I have to say a word about the actress who played the baby snatching house slave (per the programme I believe that’s Amanda Rolle playing Ana), every time she returned and silently lifted the child, anger and by the end something like hatred blossomed in me – and to her, I say, well done. The acting in general (especially Khadelia Williams as Makeba, Gh’lece Philip as Modda, Latanya Grant as Miriam, Eddenya Aska as Penny, and Arleth Rodriguez as Lily the innocent who gets raped, offstage) was well done especially when you consider that these are secondary school students. Honey Bee Theatre – formed in 2015 with AGHS theatre arts student and a regular winner at the National and Regional Schools Drama Festival, with a couple of tours to Turks and Caicos in 2018 already, and scheduled to return to the local stage with Derek Walcott’s Ti-Jean and his Brothers on April 20th 2019 – is made up of AGHS students, and their aplomb (defined here as the fearlessness to go big but also the sensitivity to dig in to the subtle character moments) on stage is a credit to their teacher/director. Credit as well to the costuming (Rody Christopher) and the smooth transitioning (set design and back of stage team) that kept the play moving at a good pace. Though it was roughly an hour it felt almost too short (though not incomplete) when it ended.

Airall spoke in her welcome remarks and acknowledgments of the value of having an administration that supports the performing arts, in work and action, and after a night at the theatre with AGHS’ Honey Bee Theatre, my final thought is all schools should be so lucky.

<—Go to the most recent edition of CREATIVE SPACE