Antigua and Barbuda needs a national art gallery. That’s my first thought looking at this image – a wide view of the Independence visual arts exhibition on show outside the arrivals area of the V. C. Bird International airport late October to early November 2019. This is the second season at the airport for visual arts, a consistent part of the Independence programme, which typically has an arts focus (and sometimes literary arts which is a no-show this year).

I wholly enjoyed last year’s show, and featured it in the CREATIVE SPACE series. I had concerns about the location not because it doesn’t show the work well – with the openness of the space and the lighting, it does – but because it’s the airport. It’s far from foot traffic (so, limited walk-ins) and for vehicular traffic, road bumps include the distance and the fact that there is no free parking at the airport. It’s doable but it’s not convenient. And an arts show built around Independence should be accessible to the Independent people it reflects and celebrates – with even a limited run in a more central location (and advance promotion to make sure they know about it).

This year, I went at night (and, bonus with the airport being 24-hours, night viewings are not a problem) but the road construction activities, which leaves a single lane in some areas, on Airport Road/Sir George Walter Highway still made it tedious. I can’t imagine what it’s like in the daytime, never mind when there are international flights scheduled. The traffic strain on that road must be crazy.

So, is the art worth it?

Of course, art is always worth it, and it’s delightful to see so much art from Antigua and Barbuda on show – a rare treat since the closure of private gallery Art at the Ridge and in lieu of a national gallery which (like literary arts) does not seem to be a national priority. But I have to admit I was less wowed by the exhibition as a whole this year than last – I would say it could have been more carefully curated, some pieces could have been pulled/edited for a more cohesive and higher level show, but I don’t have the artistic authority to say which, nor perhaps to even make such a claim. I am merely a lover of art (with some knowledge of art history), and though I am a creative artist myself (literary arts) and have reported on the visual art scene over many years, I am not an expert. But I do know when something hits me with a wow and nothing did this year as Mark Brown’s bold and grand ‘Black Madonna and Christ’, the minute I stepped in last year (and there were just more wow moments on  a technical, thematic, and emotional level for me last year; more of a mix of artists and styles too, it felt like). That said I discovered some new-too-me artists, and I did like some pieces. 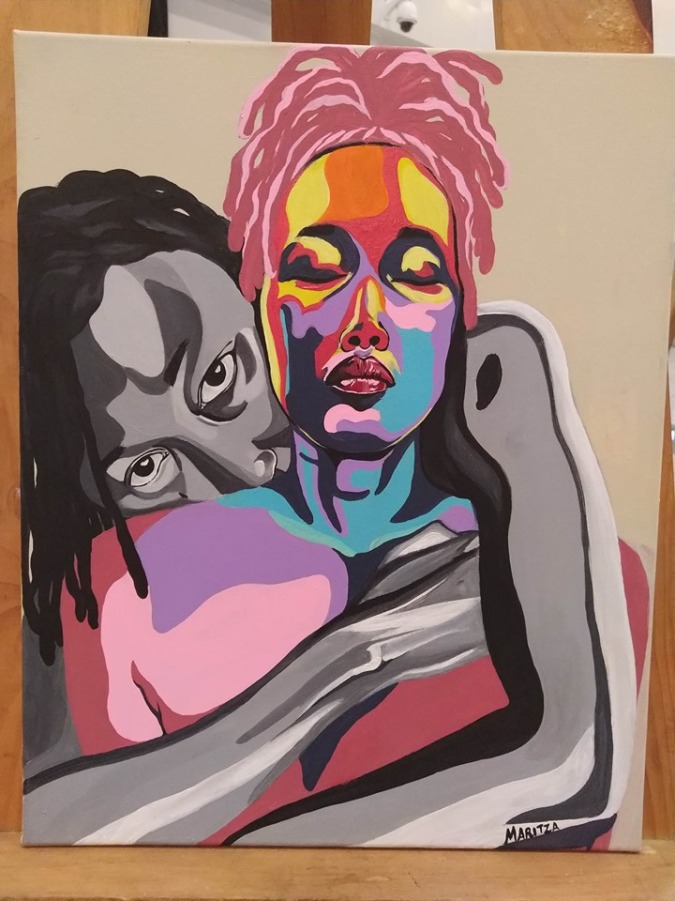 The title and the actual image were in such harmony that you felt its intention before reading the title (which wasn’t the case with each piece, even after reading the title). I like that at first glimpse it could be about that central, feminine character, being embraced, but not confined, by her love, so that she can breathe free and be. Like a visual read of the Otis Redding soul classic ‘Try a Little Tenderness’. But at third or fourth glimpse, at an angle, it’s possible to see it also or alternatively as the self embracing the self. The outer figure is grey and the inner figure a swirl of colours, face in peaceful repose, adding weight to the idea of the inner self, the core, feeling protected.

One of a handful of shows that stand out from my years covering art in Antigua and Barbuda is Heather Doram’s Strength of a Woman show from 2005 or so, when the artists’ space at Woods mall was still open. It showed variations of womanhood – women being fully, colourfully, unapologetically, vibrantly themselves. It was inspirational and aspirational. That collection has stayed with me so much so that when I saw ‘Right Place, Right Time’, I easily identified it. Delighted to see the upturned purple face, white locs defying gravity here again, even if it means, amazingly that no one with deeper pockets than mine has snapped it up as yet.

Beyond those, I also liked, more or less, Kendra Davis’ ‘Wadadli Renaissance’, a 2/3 acrylic portrait on canvas that sings #blackgirlmagic, Shelleysha Morgan’s ‘Colour Profusion’ which has some hidden elements among the dominant psychedelic swirl, and Nancy Offerman’s moody take on the requisite Caribbean beach scene in ‘Beach on a Cloudy Day’.

I attended the show with someone who particularly liked one I’m going to call the coconut painting since I didn’t get the name (it’s to the far left of the opening image – apologies to the artist) – I liked it well enough for its vibrancy and play of light and shadow though it didn’t really speak to me in a unique way, and Glenroy Aaron’s ‘Child’s Play’ – for the same reason I’ve liked Aaron’s paintings in the past, there is an aliveness to his characters that make them feel like snatched moments (like if you stare long enough you could hear the laughter and chatter of the children at play).

There were a few conversation pieces for us – as in the pieces that had us in conversation (probing, if not always arriving, at meaning). One was the mixed media ‘Our Bird’ by Miguel Nation, who had a number of images in the show (including a mixed media piece of a child being carried in a sling that also drew the eye), this one centering the Barbuda frigate and by extension Barbuda haloed in a storm; another, Zavian Archibald’s ‘Queen Esther’ (possibly, the Biblical Esther or a past or imagined Royal – definitely a curiousity)  and, to a degree, her ‘Birth of Racism’ (with embryo or mother or both at centre of geometric-and-yet-not-seeming shapes in black, white, and grey) p.s. I liked her craft piece ‘Sleeping Indian’ (finally, I see it!); Emile Hill’s sole piece, a solo child in full exuberance, figures shadowed in the background; and  Kallan Rodney Greene’s ‘Jean Bull’ in acrylic and charcoal. 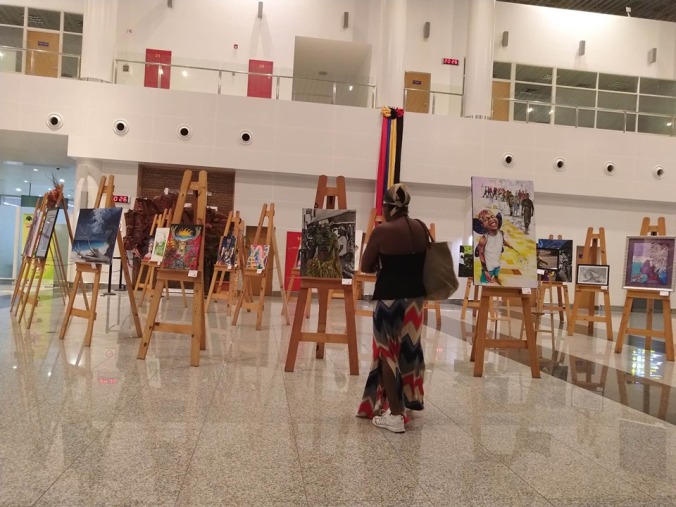 The latter (being viewed above), a scene initially dismissed as another j’ouvert/mas scene but on closer study seems to be suggesting something bottled up, something like impotent rage, in the stance of the body, the expression on the face, the seemingly amputated horns and (maybe) sheathed hands (unless both are just  a play of light). Maybe it’s a stretch, but it does draw the eye back to consider what’s really going on.

And isn’t that part of what we want art to do?

This image is not a part of the Independence art exhibition – it is street/public art that I decided to capture when I realized it seems like it’s being primed to be painted over. If that’s the case, that’s unfortunate and commentary on how we treat our art and our icons. Edris Silston is a pioneer businesswoman in Antigua and Barbuda, this wall at the long-removed Fibrey community, commemorated her after her passing. Years ago, then Culture Director, Heather Doram, commissioned a number of portraits of local icons, the beginnings of a national collection. It’s not clear what’s become of those portraits, nor of plans for the national collection since her departure from the role; but it’s not a stretch to imagine other images and icons that matter to us collectively as a society in a national collection in a national gallery. But it’s more than this. Every national gallery mission statement I’ve researched articulates some variation of its purpose as preserving, collecting, exhibiting, and fostering the understanding of works of art at the highest possible standards – which means that such a space is a not just a repository of visual art (though it is), nor a showcase for same (though it is), nor an articulation of the art history (and arts aesthetics and movements) in a particular country… (though it is), but also a space that helps raise the standard of art being produced in a country with carefully curated shows, workshops, and the like. Besides which acquiring from artists pieces for a permanent collection would speak volumes of what we value. Plus, there’s tourism. We’re always saying the beach is just the beginning; well, a national gallery could be something else.

This opportunity-to-sponsor post is part of the online edition of my culture-and-arts-focused CREATIVE SPACE series. While CREATIVE SPACE as a brand dates back to 2009 when it was published in a regional inflight magazine, the online series has run in this space beginning in 2018, and through a syndication relationship with Antiguanice.com reaching thousands (potentially hundreds of thousands) more. I have plans for the growth of this series. My background is in both journalism and creative writing, and this series is a natural extension of my passions and my expertise. It’s an opportunity to provide even more coverage for the arts which are too often overlooked. The series’ continuation will be dependent on financing which is why I’m asking companies in Antigua and Barbuda to embrace this advertising opportunity – boosting their brand while boosting local art and culture. So, if you wish to support Antiguan and Barbudan art and culture while advertising your brand across potentially multiple online platforms, contact me.