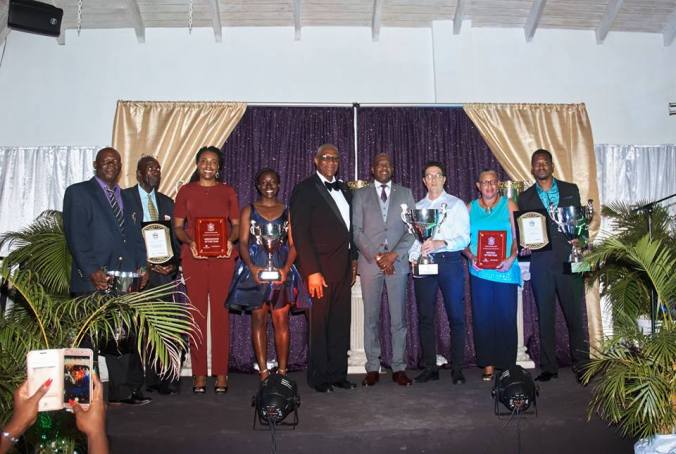 From the Ministry of Sports Antigua-Barbuda facebook page. Group photo of the winners.

The National Sports Awards, the formal recognition of our athletes and the officials and administrators who help our sports thrive, was held this last weekend. Special awards were given to members of Team Antigua Island Girls, the quartet of Antiguan and Barbudan women who rowed 3000 nautical miles across the Atlantic, arriving last month to much fanfare, and to international coverage as the first all black  and first all black female crew to row the Atlantic, really the first all black and all black female crew to cross the Atlantic by choice period. The fact that they did this by choice has been emphasized and was emphasized again at the event, given that as a predominantly black country our ancestors who arrived here in chains from Africa did not cross the Atlantic by choice. Something to think about.  The crossing, according to the awards magazine, took them  “forty-seven days, 10 hours and 25 minutes”, La Gomera in the Canary Islands to Nelson’s Dockyard, Antigua as part of the Talisker Whiskey Challenge,  13th out of a field of 28, only the third Antigua team to attempt and complete the challenge.

Another special awardee was Fitzroy Brann, former director of Community Development Sports and Games of some 30 years. Lifetime achievement awards went to Evans Jones (athletics), and ailing former cricketer (like Brann, absent from the festivities) Rolston Otto. Let me say this now, if I missed any one here or in the competitive categories, I apologize – I was not on the job but having attended I decided to make a CREATIVE SPACE out of it.

Winners in the competitive categories meanwhile include senior sportswoman Jess St. John, a shot put athlete distinguished for lowering the national record three times at the Commonwealth Games in Australia in 2018; junior sportswoman, also in athletics, 100m specialist Soniya Jones, who medalled at CARIFTA, and represented at several other regional and international events; administrator of the year Basketball Association executive Carlton Brodie, who has been active in and helping to shape the development of the sport some 30 years; Jason King, winner in what they called “mind sports” for his exploits around a domino table – including capturing the mixed pair title at the World Tournament in Guyana; junior male winner was Tyger Tyson for sailing, repeating in this position for his kiteboarding accomplishments including qualifying for the Youth Olympic and Pan American Games. Stefano Mitchell was male athlete of the year for swimming but the details fueling this win were not in the awards magazine which had several errors  and omissions – including repeating another athlete’s accomplishments in his space, a fact for which the master of ceremonies was forced to apologize. This is unfortunate given that this event is the hardworking athletes’ opportunity to shine with the magazine being a keepsake for nominees and winners alike.

Edith Clashing. From the Ministry of Sports Antigua-Barbuda facebook page.

Official of the Year was Edith Clashing, one of the people instrumental in the expansion and popularity of swimming; during 2018 serving as technical director and, among other things, initiating the learn to swim programme in public schools, serving as chief referee at local swim meets, and having a presence at off island events like the Pan American Masters Championships.

Association of the year went to the Antigua and Barbuda Basketball Association, I believe, and I believe Marlon Mack of athletics is coach of the year (I’ll correct if I’m wrong on that). 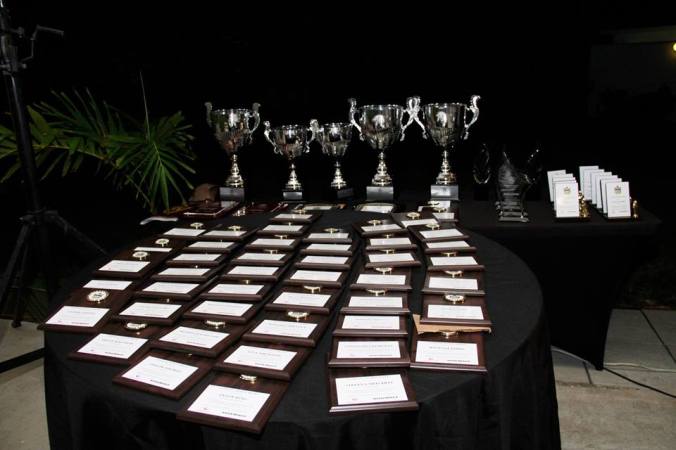 From the Ministry of Sports Antigua and Barbuda facebook page.

The awards were staged at the lovely and elegant indoor/outdoor Fitches Creek venue La Casa Palmadita – nice ambience, great service, and delightful music from pan master Aubrey Lacu Samuel (there was after event music as well but I missed that). An all-around enjoyable and well-executed evening (for me anyway), though I imagine the athletes and associates were a little more tense as they awaited the judges’ decision. From where I was sitting though, it was a sedate event when one considers all the melee leading up to it – the Ministry’s griping about the associations’ alleged failure to submit nominations on time, some associations calling BS on that claim, and the at times contentious relationship between athletes and the Ministry – hard to hear St. John’s name for instance without remembering the time she publicly complained in the press about not being properly outfitted for an international meet (though they quickly made nice in the media after that blow up as I remember it).

So, I leave the event with the hope that the Ministry backs up its chat in terms of boosting the athletes – with proper facilities, opportunities, and support, year round (and since culture and the arts also falls under this Ministry, same). I leave as well with the hope that those who left the event with an also-ran plaque which, full disclosure, include my sister (nominee for administrator of the year Dianne Hillhouse) and niece (nominee for senior sportswoman Djeri Raymond) both submitted by the Tennis Association, are not too discouraged by the outcome to keep doing the work and keep taking the association honours as an opportunity to spotlight what they and their athletes have been doing.  Reading through the magazine, I am impressed by what our talents continue to do and how they continue to shine against the odds; kudos to all the nominees, because for shining in your sport, you are all winners.

<—Go to the most recent edition of CREATIVE SPACE