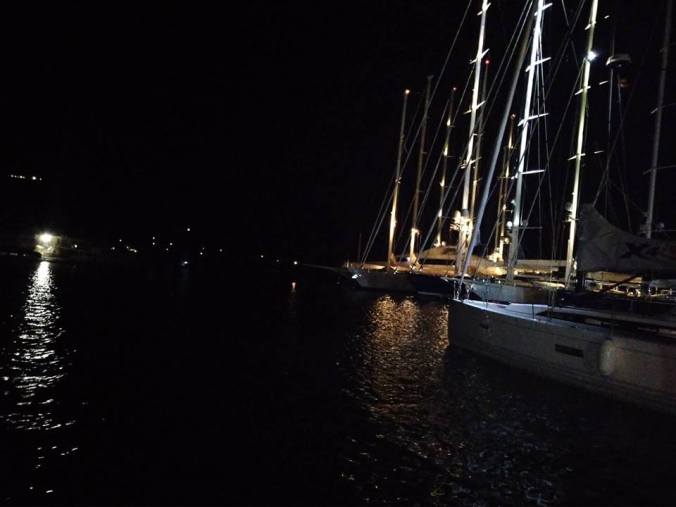 Last night (Tuesday 26th 2019 but probably more like Wednesday 27th 2019 since I was out on the dock at the Nelson’s Dockyard past midnight), I saw the last of the rowers in the 2018 Talisker Whiskey Challenge, a 3000 mile row across the Atlantic Ocean, arrive. She was a lone woman, the first to complete a solo row across the Atlantic (I believe), and she couldn’t stand, reportedly because of a foot injury. She had been at sea more than 70 days and she was smiling. A weary smile to be sure, but a smile nonetheless. She was embraced in welcome by all iterations of Team Antigua – the first Guinness world record setting oldest team to cross the Atlantic, the team that followed in good time the year after, and Team Antigua Island Girls which continues to pick up international accolades as the first all-female-all-black team to cross the Atlantic.

We wondered, a small group of us, why they do it and speculated that the adrenaline rush is no doubt its own intoxicant, for people who declare I’ll scale that mountain (as the female solo rower we were waiting for had), I’ll row that sea, eye on a personal horizon line – this being the kind of race where finishing, more so than coming in first is its own victory.

I’m talking about the final rower because that’s the arrival I witnessed in person (having streamed Team Antigua Island Girls’ arrival) but each of the rowers landing here is worthy of his or her own narrative, and for us in Antigua and Barbuda none has been more compelling than Team Antigua Island Girls. The were met by an overwhelming crowd on arrival at the UNESCO World Heritage site Nelson’s Dockyard after rowing 46 days across the Atlantic, and have since been feted in major pubs like ESPN, Essence, Ebony, and others.

I remember when I interviewed the first team from Antigua for Caribbean Beat magazine, Dr. Nick Fuller spoke of the journey as something he felt compelled to do given that Antigua was always the endpoint but never the participant in races of this type. That first row by an Antiguan and Barbudan team showed others with the itch that it would not be easy, but it could be done. On the day of Team Antigua Island Girls’ arrival in January, Dr. Fuller, speaking with ABS TV, summed up the teams’ thus: “My team, myself and the guys were the first to go and we have the world record for the oldest team ever to row an ocean and the oldest person ever to row an ocean – that’s our highlight. Eli’s Team, Eli, Scott, Big John, Nico, their standout point and it’s a very special one, is that they shattered the world record by five days in their row. And the thing that stands out most, to me anyway, with the girls is that it’s very historically relevant and culturally relevant, because Antigua’s a black country, it’s a black nation, it’s 87 percent plus black and the team is all black; and it’s important historically because they’re leaving from the west coast of Africa where their forebearers came from, the difference being (as) slaves, and here these girls are rowing across on their own volition following the same path and ending up in the Caribbean where their forebearers are; and I think that’s so important. It really brings out Antigua as a nation, you know, it’s almost a full circle.”

I do hope that the Government will be embracing the ambassadorial role this third team of firsts could potentially be elevated to – a vacation is nice, but for me, this is bigger than that; what they have done is bigger than that. Add to everything that’s been said that they competed in a sport dominated by white men from other places. That as woman they have to consider things like monthly cycles (yes, I’m talking about menstruation; it’s not a dirty word) that the male athletes don’t. That, as they explained in the video interview above, they had challenges specific to them – three of them are mothers, one has clinical depression which she said is synced with her cycle, and one didn’t know how to swim when she signed on ahead of the nine months of prep that they did – oh, and that nine months of prep is less than most teams.

The athleticism, the physical and emotional challenges, the historical resonance, the spotlight, the heft, and the daring of it all!

On this last night, of the World’s Toughest Row, we sat for a time on the dock, waiting, watching the entry point for a light. It took a while but any sense of restlessness gave way to the joy of bearing witness as the flare lit up at the entrance to the iconic sheltered bay, and even though we (or, I) still couldn’t see her (her being Kelda Wood of the UK) clearly. But then there she was rowing slowly those last precious moments toward the dock as Queen’s ‘We are the Champions’ blared and the crowd cheered and mouth horns startled those of us who weren’t expecting them (again, me). There in the dockyard where luxury yachts berthed and  welcomers had gathered for this lime 20-high times this year (I believe), it still in the end came down to this, journey’s end.

The nervous farewells, the careful tracking, the euphoric arrivals combined, a reminder that we can – whatever our dream, once we have clarity of purpose. Maybe not without being blown off course now and again, nor without effort beyond what we think we have to give, and perhaps injury. But we can.

On this night, at the finish line, the crowd is smaller, significantly smaller, than that which came out to see our girls’ historical arrival. Still, there is a real sense that every arrival has meaning. Rowing the Atlantic may not be your thing, it says, but what do you want, how much do you want it, what are you willing to sacrifice to get it, and who will greet you on arrival.