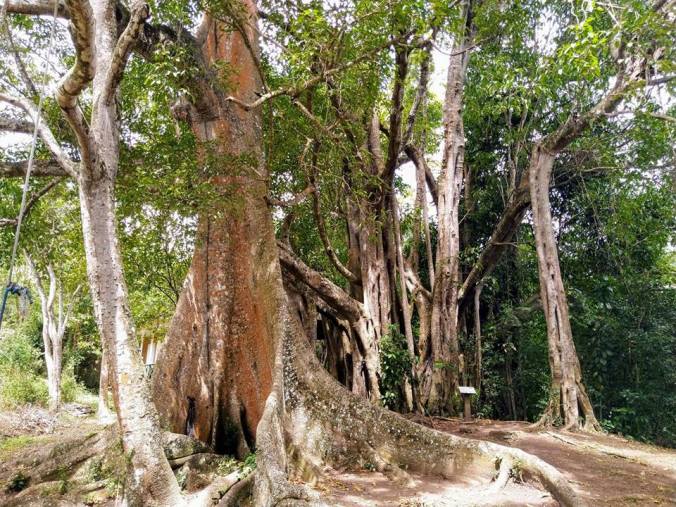 Wallings is a forest in Antigua popular among locals and visitors alike – for hiking, camping, picnicking, picture taking, bird watching, and more (school trips to relaxing solo meditations). Located in Antigua’s southwest, the area’s main architectural feature is a reservoir built – between 1890 and 1900, with repairs and renovations thereafter – to serve the surrounding villages. 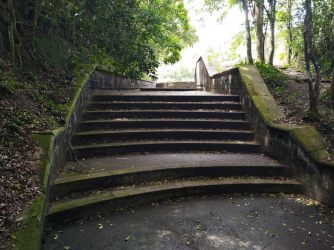 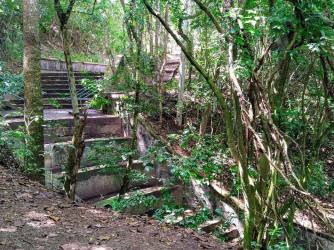 For history buffs there is interest in aspects of the original late Victorian/early Edwardian era construction; for nature buffs, the multitude of plant and tree varieties, the varied birdsong and sightings; for tourists and local hikers, the panoramic view atop Signal Hill and the dip down to Rendezvous Bay are part of the appeal. There is a swing under the 100 plus year old silk cotton tree, where the water catches in a valley below green hills, there is even an old brick pit for barbequing (littered on this day with a left-behind water bottle and the screw top from a sparkling wine bottle). 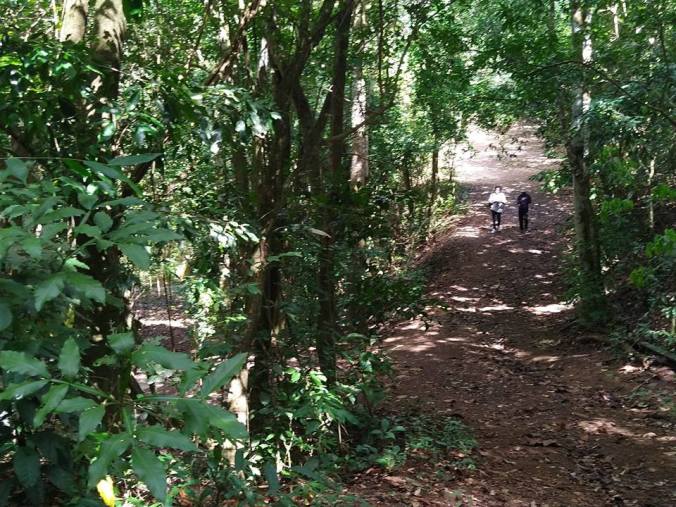 As with many places in Antigua and Barbuda before someone realizes its touristic potential, Wallings was a come as you like space – and bore the abuse and neglect of that open track policy in theft and vandalism, and waste left behind or specifically dumped there. A decided upside of the changes is that these vices have been curtailed; a downside is that access is limited. This has created some ruckus including one incident that made news last November – when a regular tour operator challenged the new pay to enter policy. 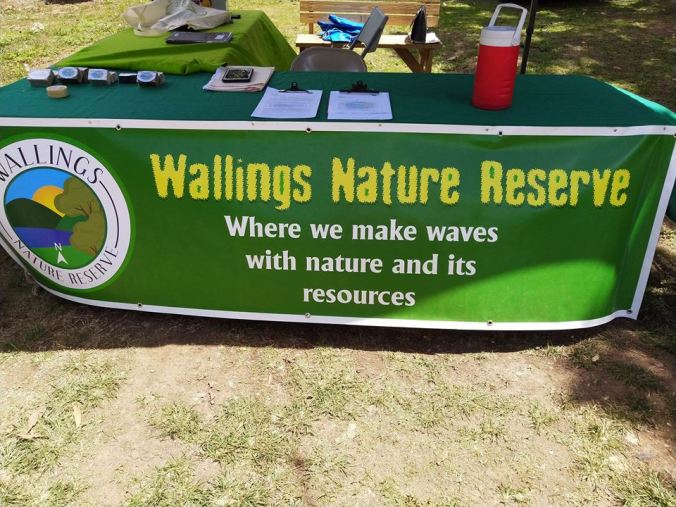 Wallings Nature Reserve does feel a lot less like a place that you can just drop in to and sit for a bit as some of us might have done in the past – there is a parking area, limited traffic up the hill (no more than 8 cars at a time), and there is a station at the entrance where fees are taken, information is given out, and paraphernalia like locally-made soaps are sold. 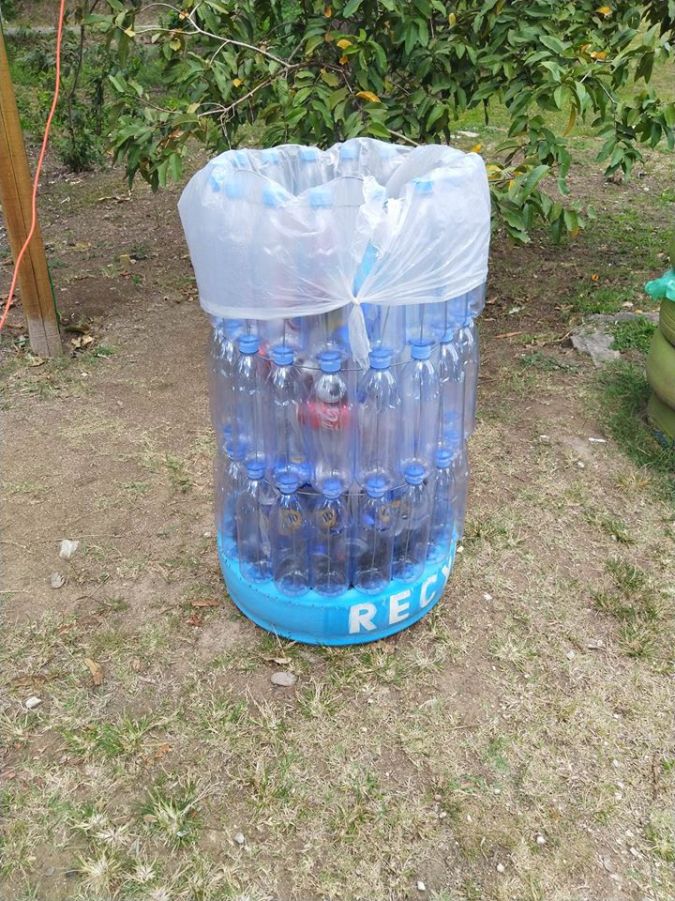 There are colour-coded trail markers, an administrative building under construction, and port-a-potties. The area is generally cleaner (with as much as 57 bags of garbage cleared away after one clean-up exercise). Trenches have been cleaned out and sediment traps have been cleared. Bins (made from re-used material and sourced through the Adopt a Coastline project) have been put in to discourage littering. Activities like the harvesting of soldier crabs have been stopped. And a squatter has been evicted. That’s only some of what has been done, and only the beginning – there are plans, for instance, to replace the damaged picnic benches using corporate sponsorship. 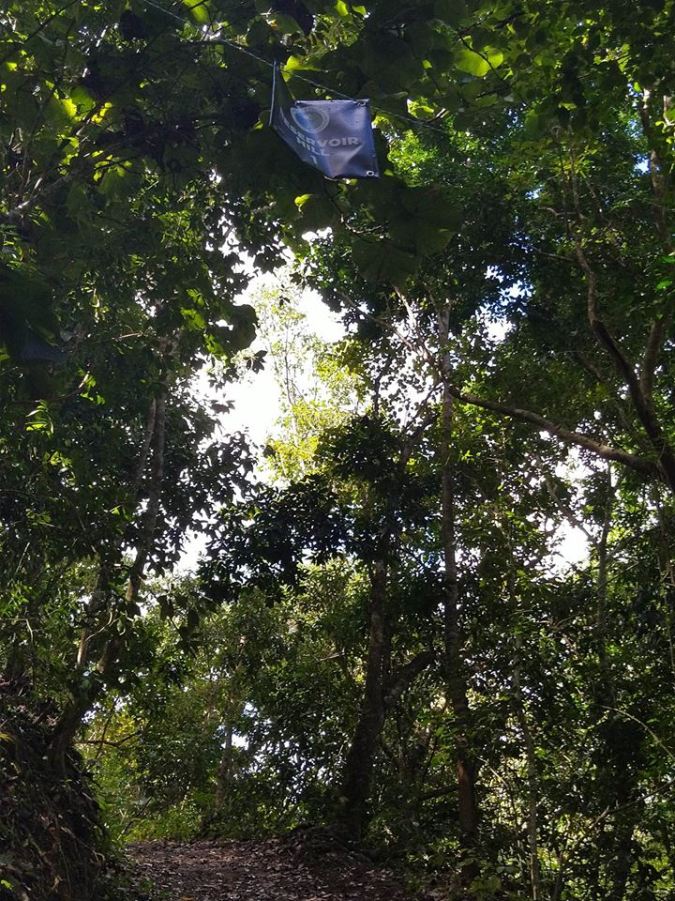 Refica Attwood, executive director of the Wallings Nature Reserve, indicated that additional grant funding will also be sought as they move to address: data collection re site use, improved accessibility for those with mobility issues –  including wheelchair access to restrooms, a shuttle, electric powered carts; alongside other structural developments, from completing the admin building where there will be reception and an office, plus the cashier, to upgrading drainage to reduce erosion. Other major changes anticipated include the construction of a bridge as an overpass from one side of the reservoir to the other and electronic rather than physical tags to identify the different flora in the park. 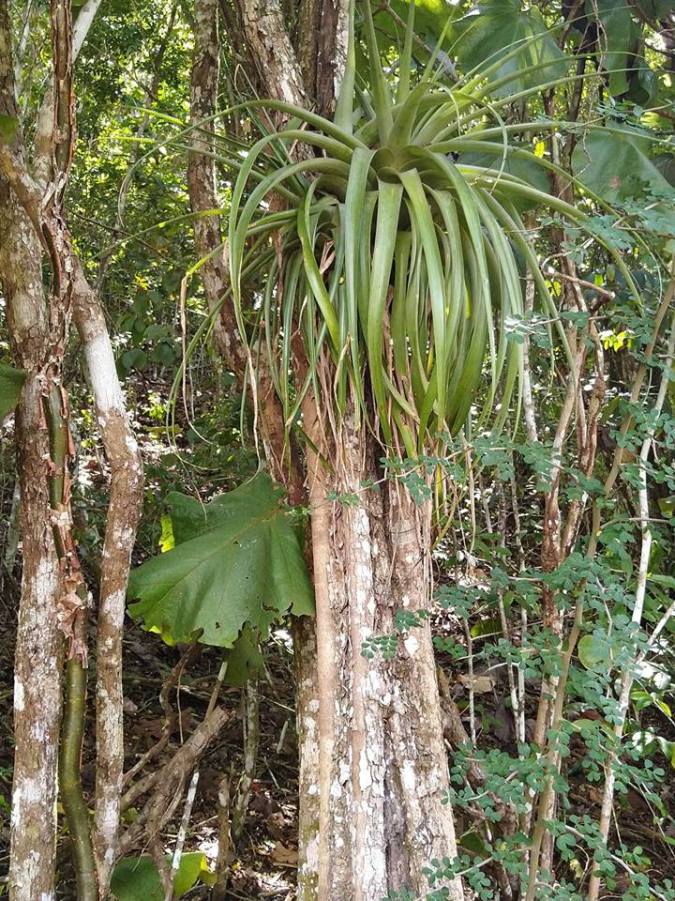 Attwood is from the John Hughes community and, observing that Wallings was not being cared for, she decided to pursue funding to change that. It was her initial proposal that got the ball rolling – a roughly three year process from idea to opening, in November 2018, as a not for profit company.  It’s clear that she feels ownership of that – running things day to day and saying that she is the one with the operational plan, while dismissing some of the criticism that has come with change as “malicious rumours”.  Still, it is not a one woman show. The project does have a board and has, Attwood reported, collaborated with various government departments – Agriculture, Tourism, Environment, Community Development (“they are technical advisors”) – and with the community of John Hughes (“they’re supportive and pitch in when they can”). She added that volunteers are welcomed and a membership drive (including corporate membership) is planned. This will result in different teams taking responsibility for the different areas of the work to be done. 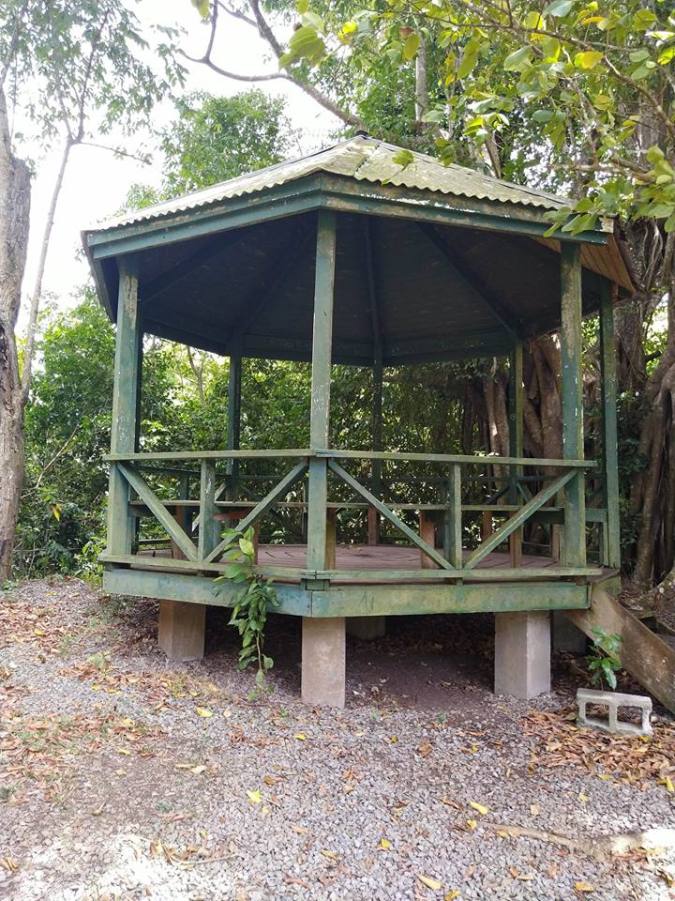 Attwood noted that there has been no significant cash injection since the original funding from the Global Environmental Facility (GEF) and that another two million at least is needed.  Along with fundraisers and pursuing additional grant funding, the entrance fee, she said, is essential to the work. 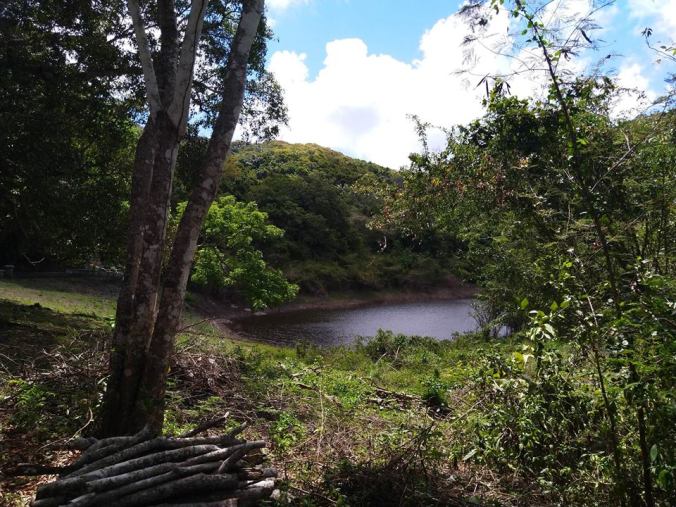 On the point of access, Attwood said when it comes to school, youth group, and church trips, “we’ve been using our discretion”, sometimes asking people, especially those unaware of the changes/charges, to “make a contribution and go ahead”. There are grumblings – after all this is an area to which people previously had free access. Also, it could plausibly be argued that there is a difference between a local child (on a school trip for history, literature, geography, or a know-your-island exploration) and a tourist. What of the grandmother who came there to take a picture for her birthday (a story told by Attwood) because it’s her favourite place, or a public school teacher with a bus load of students, not all of whom can afford even a modest entrance fee, who has to dip in to her pocket or disappoint her kids? This seems to be an evolving issue and is certainly a lingering concern. I will admit that especially in light of pernicious and recurring efforts to restrict beach access, which is a right in Antigua and Barbuda, I am especially watchful whenever I hear news of restricted access to areas the public previously enjoyed. But I appreciated Attwood’s efforts to explain and her indication that policy with regards to this issue is evolving. 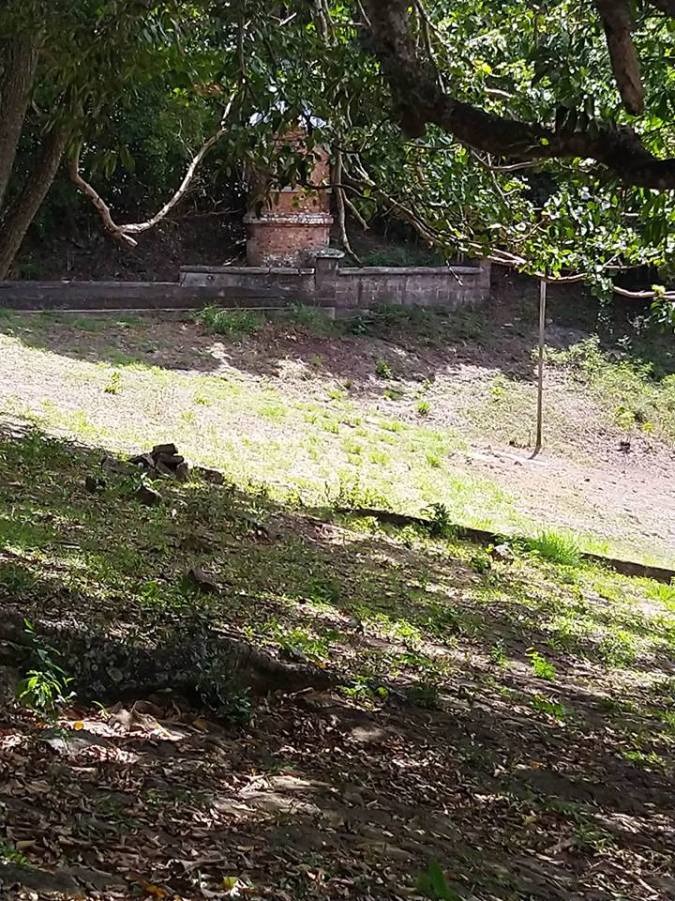 In the long run, she said the changes will benefit all – providing jobs and preserving a portion of our natural, cultural, and historical environment.

And now for the first time in the CREATIVE SPACE series, here are some VIDEO EXTRAS:

-by Joanne C. Hillhouse
Photos and Videos by Barbara A. Arrindell