Here’s a link to the issue as it appeared on May 6th 2020  in the Daily Observer: CREATIVE SPACE 6 PRINT EDITION 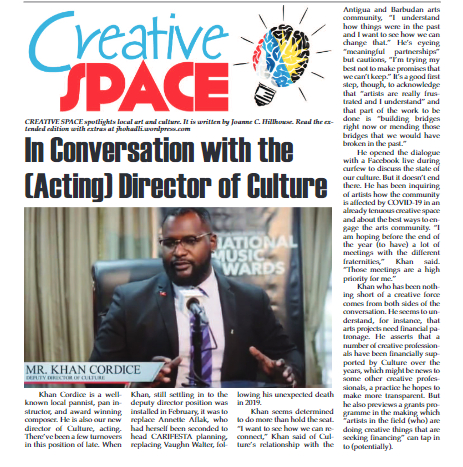 If you would like to be featured or to sponsor a future installment of the jhohadli.wordpress.com online edition of CREATIVE SPACE, BOOSTing your BRAND while boosting Antigua-Barbuda Art and Culture (contact Joanne to find out how)

CREATIVE SPACE: In Conversation with the (Acting) Director of Culture

He is also our new director of Culture, acting. There’ve been a few turnovers in this position of late. When Khan, still settling in to the deputy director position, was installed in February, it was to replace Annette Aflak, who had herself been seconded to head CARIFESTA planning with Antigua and Barbuda set to host in 2021. She was replacing Vaughn Walter following his unexpected death in 2019, having previously replaced him at Culture after he was seconded to CARIFESTA. I mention these turnovers to underscore the phase of transition in which the department responsible for steering art and culture in Antigua and Barbuda finds itself.

Khan seems determined to do more than hold the seat. “I want to see how we can reconnect,” Khan said of Culture’s relationship with the Antiguan and Barbudan arts community, “how we can mend some of those broken bridges because I’ve seen it over the years even as an artist outside – we are disconnected – not just culture to artists but even among the artists.”

For projects being contemplated, projects already in development (e.g. CARIFESTA, data accumulation), and projects that could be elevated, he indicated that that re-connection (or maybe real connection for the first time) needs to happen.

“I understand how things were in the past and I want to see how we can change that,” Khan said. He said he doesn’t want to just pick the brain of artists (a familiar request) but create “meaningful partnerships” (involve artists, support artist projects, empower artists). It only makes sense given that Culture is small relative to the number of arts disciplines in Antigua and Barbuda. “I’m trying my best not to make promises that we can’t keep,” Khan said. But it’s a good first step to acknowledge that “artists are really frustrated and I understand” and that part of the work to be done is “building bridges right now or mending those bridges that we would have broken in the past.” Especially with CARIFESTA, COVID allowing, around the corner.

Speaking of COVID, Khan has used the stillness forced by the pandemic to host an online live with artists about our varying opinions about the state of our culture, inquire of artists how the community is affected by what’s been for many a work stoppage (in an already tenuous creative space) and about the best ways to engage the arts community, and to put out content virtually in the interim. When we spoke, for instance, he was editing exercise videos produced by local dancers for uploading and mentioned that he was also transcribing old recordings with an eye toward reviving fife music. “I am hoping before the end of the year (to have) a lot of meetings with the different fraternities,” he said. “Those meetings are a high priority for me.” Of course, there’ve been meetings before. What else? “A series of village road shows in preparation for CARIFESTA. We want to use CARIFESTA as a tool to reignite some of our traditional cultural heritage.” Will that make up for past CARIFESTA slights, something that’s been discussed in the literary arts community, for instance. The cautious optimism some like me might feel is largely out of respect for Khan who has been nothing short of a creative force, and who comes from both sides of the conversation.

He understands, for instance, that arts projects need financial philanthropy – and even as he asserts that a number of creative professionals have been supported over the years, which might be news to some other creative professionals, a practice he hopes to make more transparent – he previews a grants programme in the making. His team, he indicated, is working on formalizing the application process which “artists in the field (who) are doing creative things that are seeking financing” can tap in to (potentially). The team, he said, has “just finished the first draft. I vetted the first draft. When I get to the final draft I’ll be reaching out to a few people.” So, he said, that project timeline will likely run in to the last quarter of this year and in to next year. Bottom line is funds are out there and, if I’m reading Khan correctly, Culture is going to be more proactive about channeling those funds to the artists doing the work – and if I am reading him correctly, that is good news.

Another thing he said that sounds, promising is working to boost projects initiated by the arts community rather than duplicating said arts initiatives, effectively trying to reinvent the wheel. “If Antigua Dance Academy (for instance) has an international dance festival (which I remind him they do, in Out of the Drum), I don’t see the need for us to try to (re)create that,” said Khan. “What if we go in and support it.” What does support look like? “Money to offset expenses, personnel to support; that is the sort of relationship we need to have. The idea of trying to do everything in-house, I’m not a big fan of it.”
He recognizes, though, how impactful having advocates in house can be for an arts discipline and speaks fondly of Barbara Mason – “she is like a mother to me” – whom I also remember as someone who carried the revival of pan on her back: igniting the youth programme that fed in to the national programme through initiatives like the National Youth Pan Orchestra, bringing people like pan master Babu to Culture. She did this from within the walls of Culture. Khan said this kind of advocacy is needed in leadership outside of Culture as well; positing that just as or more important than talent in key roles was having “somebody who loves the art form and wants to see it move forward at the helm.”

In addition to removing the blockages in the communication lines between Culture and artists, Khan has, also, assigned someone to keep her ears to the ground for happenings in the arts community that they can support.

As for Culture’s existing schools’ initiatives, he wants to set benchmarks, so he’s working with his team on “curriculum design for each of the areas being taught out of Culture…what I want is for us to be held more accountable…I want at the end of every year we can see the development.”

So much of what Khan says sounds promising and no doubt arts practitioners like myself will be likewise looking to see the development.

You will remember when I interviewed Heather Doram for CREATIVE SPACE 4 of 2020, I asked her to select her personal choice for seminal Antiguan-Barbudan works of the last 20 years (the subject of a future CREATIVE SPACE) inspired by an article in the New York Times that asked a similar question of African-American artists re American art. I asked Khan the same thing. He replied, “I can’t think of anything specific but I think (in terms of) the effects/outcomes of the (secondary schools national) drama festival, what would have developed out of it; we have these artists that existed before that used to be a part of theatre… but the rise of more Antiguan (and Barbudan) writers also seeing a lot of young people being involved in theatrical presentations.”