Here’s a link to the issue as it appeared on June18th 2020 in the Daily Observer: Creative Space DO 9 Chav 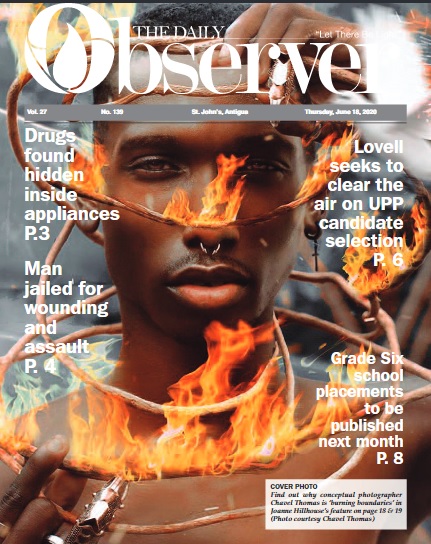 If you would like to be featured or to sponsor (i.e. advertise with) a future installment of the jhohadli.wordpress.com online edition of CREATIVE SPACE, BOOSTing your BRAND while boosting Antigua-Barbuda Art and Culture (contact Joanne)

Chavel Thomas, 26, has a portrait called ‘Burning Boundaries’ in which he’s literally set fire to the vines/bars around him.

Chav, his art and his other identities – DotKidChavy, the conceptual photo-artist; ChavdKid, the Carnival-loving social media influencer, is metaphorically about doing just that.

Being different can get you bullied, “physically and emotionally”, and it did; that’s part of Chav’s story. Flipping through his social media, though, one sees a young man who embraces not being like everyone else, right up to the ever-changing follicles of his hair; easy to see him as one of the cool kids but it’s not that simple. Chav calls himself an ambivert – balancing extrovert and introvert impulses, who finds it difficult to articulate in words. That’s where his art comes in.

One of his recent images also uses fire imagery and self-portraiture, and as he is a Black man, a single tear etching a path through his skin, it couldn’t speak more to the moment if it spelled out ‘Stop Killing Us’.

That it does spell it out, in fire, puts a fine point on it. But the image is not just about #BlackLivesMatter.  It, also, speaks to “being tired of being a Black man in society, being tired of all these standards that we’re supposed to hold, how we have to be strong all the time, have to be macho, can’t have fragile moments, can’t cry”: #BlackMentalHealthMatters

In a more recent image, we see Chav surrounded by bush and gnats, his eyes flat. “I wanted to capture the empty feeling that I was having, the dead inside (feeling), how depression can eat away slowly.” The eyes are greyed out because, “when a person dies, the eye colour dilutes; so I wanted to portray everything becoming lifeless.” The bush and the gnats add to the symbolic effect of the image. “I don’t want anybody to feel as if I’m happy all the time,” Chav said. He puts himself in a very vulnerable place in his effort to connect.

As well, there’s the danger of being misunderstood – “this is going to be screenshot, people are going to talk about it.” And when your art and your identity are about burning boundaries, they will.

We talk about two other works of art, both with his signature high contrast. One is him, in profile, Egyptian iconography in the background. It is hyper-‘masculine’ and unapologetically Black – as if owning the “charcoal” label that was used to bully him. The other is softer, the still dark skin browner here, the hair as white as the flower he – Chav again – teases with his lips and teeth; there is an unapologetically ‘feminine’ energy about it.  If ever there was a rebuff to those who bullied him for always hanging with the girls, it is in this embrace and expression of the feminine and masculine in himself. 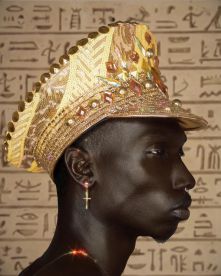 “It’s definitely about rewriting it, using my experience,” he said. It being not just what it is to be Black, or Masculine, but also an artist, and an artist in this Antigua-Barbuda space where “people would tell me, I don’t belong here,” prompting him to question “why a creative person don’t belong here?” Why, indeed.

Chav has directed the short film ‘Silence, Screams’. His art has been featured in dream publications (Essence, Afro Punk). He is a photographer in demand. Self-taught he produced a book, self-published – Art Exposed. He is a Carnival social media influencer, partnering with brands, travelling to events. Chav  is living the dream even as he continues to work to heal through his art. He feels freer when he creates, and he knows that this is what he wants to be doing for the rest of his life.

**note**This week’s issue ran in Thursday’s paper instead of Wednesday’s – not sure why, at this writing, but it’s had a great response on social media and on the airwaves, where I saw it circulating and/or heard it being shouted out even before I saw the paper. Also, I had a lot of extras from my long and truly engaging chat with the subject of this week’s CREATIVE SPACE, but yadda yadda yadda tech issues and I lost some files, including my interview notes and the longer draft from which I pull the extras. Thankfully, the abridged version had been emailed to the Observer editor some days prior; which is perhaps a note to self to upload the draft at the same time. But it’s a balancing act, timewise. And it is what it is. **I did make an effort to pull up some extras for you though and maybe share some things from memory**

re his Afro Punk feature

Chav considers this to be one of his highlights and we had an amusing back and forth in which I kept referring to the green, black, and white that stood out to me from the feature. For someone who works with colour and colour contrast, I might as well have been saying the beach with the blue water…which one, right. Well, Chav, if you see this, this one: 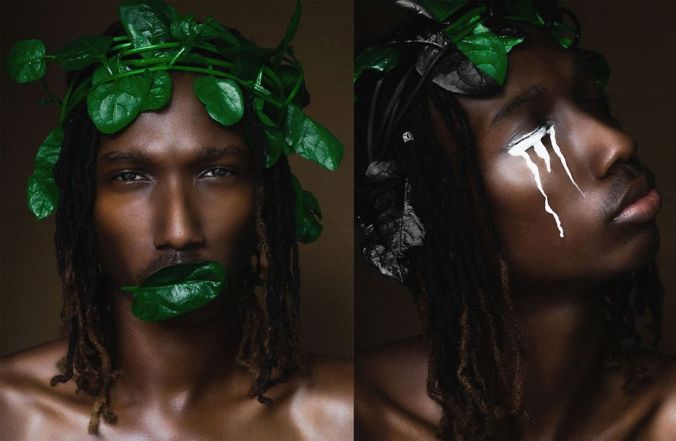 Afro Punk said of Chav in that feature, “Conceptual photography is no child’s play…Incorporating natural and synthetic elements into his series of self portraits, he creates stunning images.”

The self-published book features a number of nudes which is one of several series (e.g. Seven Deadly Sins) Chav has done over the years. 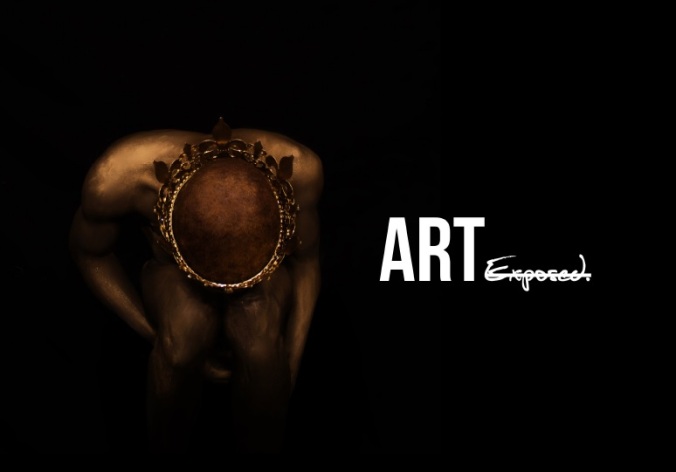 It is currently out of print. Speaking of nudes, one of my favourite stories from our interview was of Chav going from a fete (as in, straight from a fete) to an early morning shoot. He ran in to the guy he had asked to model at that same fete. They looked at each other, we still doing this, yes, yes, cool.  So they were there break of dawn, sort of wondering, we really doing this; reality meet nerves. Then the model jogged down the beach as if to get himself in to the right headspace. And then, they did the shoot.