I do these Quick Takes for books for which I won’t be doing a full review but might still have something to say – this is the 2nd 2021 Quick Takes page; for the first, go here; and search Blogger on Books Quick Takes or go to the main page of the respective year for previous Quick Takes. 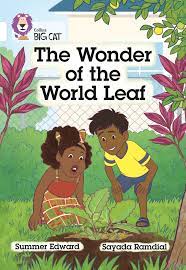 the Trinidad and Tobago author and illustrator, respectively, have created one of the more beautiful and heart warming entries in the Collins Big Cat line, an international set of children’s book publications, with this latest series focused on #ownvoices Caribbean stories. Before I even get to reading, I already love how the characters look; from the little girl, Wygenia, a can-do girl with natural hair and a colourful-Caribbean-patterned wardrobe to granny with her grey locks and the dad’s dreads and the mother with cowry in her hair and a fashionable Africa-inspired wardrobe. Still at the beginning, I did not like the ton of set up set up – what the leaf is, who the girl is, and Trinidad – instead of trusting the story to reveal all that (leaving the explanations for the back, if you still think a glossary is necessary). This approach (and the bolding of certain words and phrases), in my opinion, centers the gaze of another over that of people represented in the book (I’m sure the reason is accessibility but to truly diversify the world of children’s publishing, I guess I feel we need to stop defaulting to the Western gaze). The story itself is enchanting and accessible enough even with the local colour and use of the Trinidad/Caribbean vernacular (doux-doux, lime, fever grass). Right away I’m struck by this beautiful phrasing: “spicy sweet cloves simmer in hot honey water”. I don’t even like cloves and it makes me want to at least smell the honey water. Right away that told me something (good) about the quality of the writing. Plus, all of the illustrations work well, except the visit to St. Benedict, the perspective of which feels out of sync with the actual text, which is suggesting a bird’s eye view (already there looking down) while the two page graphic shows the characters en route. There is a familiar, perhaps classically Caribbean sensibility, e.g. in the way adults are always addressed as Mr and Miss (unlike, say, “Alice” on The Brady Bunch). The speech pattern is nicely captured (e.g. florist Mr Bailey’s “yes” at the end of sentences, and playmate Sanjay’s questioning “ent”). And the landscape, the plants, for instance, are recognizably Caribbean. The story is good and the visuals really work for me, both what they say and what they suggest, from mom’s fashion plate status in a non-European way to dad’s consistent presence, just because he’s not centered doesn’t mean he’s not there – it’s a subtle counter-narrative, as is the ethnic diversity. Perhaps my favourite lines in the book are “Granny looks sad. I feel lonely.” because it speaks to the way children process adult problems. Sanjay may be my fave – he’s so recognizable to me and so naturally Trinidadian. I like the sense of agency the author gives this little girl, over a problem that might otherwise feel too big. It could be argued that the book feels more classic than modern in the way it frames the Caribbean and the way the really beautiful images evoke a more pastoral idea of the Caribbean, but who’s to say, besides it does give that “warm…and nice” feeling, like Granny’s tie head.

The Caribbean Writer Volume 32 edited by Alscess G. E. Lewis-Brown – My story The Night the World Ended is in this collection, published in 2018 and sub-themed Rough Tides, Tough Times: Reflections and Transitions.

I also liked the evocative drawing Aftermath Queue by Phyllis Nielsen; and, in poetry, Out of Boy by Tejan Green and the poems by Daisy Holder LaFond (Island Spring 1, 2, 3). The fiction section was, of course, my favourite. I liked Jane Bryce’s When it happened, Merica by Dionne Peart (I love the tension of things unsaid throughout and something profound said at the end plus the cultural tension and the quiet fighting), Same as it ever was by Ingram Moss (an interesting parable in which people obsess about an obstacle to something they want then when it seems like the obstacle may be removed they get scared they might actually have to do something, inferring that we are our own obstacle), and Election Day on River Road by Semaj Johnson (I liked it, the action was a bit chaotic and confusing but the tension was real). My favourite was probably Uncle Jeep by Jody Rathgeb (about loss and community and becoming a writer and ghosts – loved it). I made notes about two others though it seems with mixed feelings – The Village peeping Tom by Lomarsh Roopnarine (I quibbled about the street corner gatherings being a tradition brought over to Guyana from rural India) and Lelawattee Manoo Rahming’s Spider and the Butterfly (which felt ominous throughout but I wasn’t sure what to make of the ending). I didn’t read everything in the collection word for word, scanned some of it, pausing to read anything else that caught my eye, notably the obits of Wilson Harris and V S Naipaul, which left me with the feeling that it might be time to revisit (or in the case of Harris, visit for the first time), their work. As always, even uneven as this one was for me, The Caribbean Writer remains a valuable window to not only contemporary Caribbean literature and art, but the entire arc of the Caribbean canon.

Skin Deep: Race + Culture: Is this the End? – This is issue 9 of the UK magazine that is just part of the work its producers does (along with live events and the online platform) to make space for Black creatives and creatives of colour to work towards justice through cultural production. And there are no geographic boundaries either. I submitted from my side of the pond here in Antigua and Barbuda, in the Caribbean, and had published three poems: Grandmother and Child, Weather Patterns, and Waste Not. You can read them here. I’ve finished reading the unorthodox collection (which reads in both directions, like a flip book, interesting choice, and has one activity, The Game of Life, that starts on one side of the book and ends on the other side, and was its own roller coaster of emotions). With it’s eclectic mix of photo essays, interviews, creative non-fiction, fiction, poetry, and, as I mentioned, activities, it won’t be for everybody but as with most journals, everybody can find something they like. So, what did I like? Bitty and Baby’s Shopping City Lunch Times by Radhika Jani, which I can see as a movie – like a quiet indie film; and Rice and Nuts, an allegorical satire by Joshua Idehen were probably my favourites. But I also found Feeling our way through to the end of the world Skin Deep meets Farhana Yamin by Georgie Johnson impactful (in a way that was at once unsettling and inspiring re our climate future).

The Old Guard: Tales Through Time #1 (of 6) by Greg Rucka and Andrew Wheeler with artists Leandro Fernandez and Jacopo Camagni (graphic novel)- There are two stories in this comic which takes off from one of my favourite movies of the past year, The Old Guard, which takes off from one of my favourite recent comics, Book One: Opening Fire and Book Two: Force Multiplied (listed on the Blogger on Books main page for 2020 but not reviewed – I liked it, just not as much as Book One). As The Old Guard is about a found family of immortals, the new books, being rolled out at this writing, ropes in several other writers for an anthology series looking at their lives through time. This first book in that new mini-series has the story of team leader (and oldest immortal) Andy’s battle axe and a story of Nicky and Joe, the gay battle husbands, who literally met when they killed each other during the Crusades, in 1930s Germany. In the first tale, My Mother’s Axe, Andy is in conversation with Nile, the newest immortal, a Black female US soldier from Chicago, and while it’s clear Andy has lost the details of her life, her ties to the axe grounds her to her origin story – though she’s not sure which parts of it she’s making up and though the axe has by this time has pretty much all of its parts replaced at some point leaving it with none of its original parts, save the one who wields it. It is an action driven and poignant tale. The second tale ‘Zanzibar and Other Harbors’ finds Joe and Nicky, whose characterizations don’t feel quite right to me, in a cabaret in which encroaching authoritarianism (symbolized by an almost comically villainous Nazi soldier or maybe accurately villainous given, history) is keenly felt; and in which they have to battle to protect a member of the queer community (and in which another member of that community remembers them doing so in the past…and notices that they haven’t aged a day). I liked it; I didn’t love it – and, though I stan Joe and Nicky, I liked the rendering of the Andy-Nile, Master-Padawan, relationship, more: their chemistry, and the window to Andy’s violent and sad past. Which makes sense as I believe that’s the one by The Old Guard OG author and artist Rucker and Fernandez.

Back to the Blogger on Books IX Main Page.