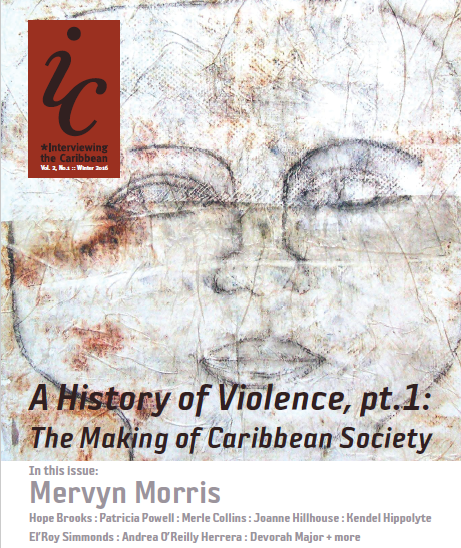 Disclaimer: I am in this collection so this is not strictly speaking a review so much as a reflection/discussion…call it what you want. But check out the collection, I recommend it.

Interviewing the Caribbean is not a book. But the literary periodical edited by Jamaican-American writer Opal Palmer Adisa is at least novella-thick at 169 pages. So I’m counting it.

Available in both digital and print editions, or both, it is quite expansive not just in terms of its page count but in terms of its span of contributors, geographies, and discourses.
This particular issue, the second, is one half of a two part exploration of Violence in the Caribbean. The chosen pieces approached violence in different ways from the violence of not-belonging if you’re gay in Malica S. Willie story ‘Swinging in the Wind’, which, though I anticipated where it was headed was no less poignant for its predictability; to racial violence as in Teju Adisa Farrar’s poem ‘A Mouth Full’; to Lelawattee Manoo-Rahming’s discussion of ‘domestic’ violence and environmental violence in service to ‘development’ in her interview with Adisa. This collection, as I’ve just indicated, spans the genres – broadly (fiction, poetry, conversation, visual art) and more specifically – from the speculative fiction of my own ‘Zombie Island’ in which foul winds stirred up by societal and political ills turns the people of a small island in to raging monsters to the conversation with Hal Greaves about his interventions in gang-riddled Laventille in Trinidad. Hal’s death, mentioned in a post-note, is sad on a couple of levels – I knew and worked on a project with him some years ago and didn’t realize he had died until I read this, the personal loss to those who knew and loved him, of course, but also the loss of someone who was intervening where intervention was needed.

“We need to find a viable path for the one who can’t pass Math or English so that they could find a place in society, because the ones we can’t find jobs for, they will find guns.” – Hal Greaves

His interview was one of my favourite things about the collection – and I usually don’t like pieces so purely journalistic in literary journals. I come to journals of this type for the art and this well-produced collection, well balanced in terms of content and visuals, delivered.

There was some interesting art – among them Trinidadian Richard Rampersand’s ‘Secrets Covered’ and Virgin Islands artist El’roy Simmonds’ ‘from the Carib Indian series’ and ‘Players’. All the artists, like the writers, discuss their work in interviews, Interviewing the Caribbean is the collection’s brand after all. This includes cover artist Jamaican Hope Brooks.

There were a couple of obits; of these,  for me, Adisa’s reflection on Jamaican-American writer Michelle Cliff was particularly moving and the tribute to Fidel Castro at the end of the book was a nicely defiant touch.

I enjoyed pretty much all of the interviews as I do enjoy peeking behind the creative curtain. I loved the brevity of the responses in former Jamaican Poet Laureate Mervyn Morris’ interview – as with his poetry, no words are wasted. Also in interviews – just a note that all interviews are not lumped together in the collection, nor are any of the genres; it just works as an organizing device for my reflection – I enjoyed both Robin Clare’s art, which , though its own unique, joyful thing, has a vibe of the ubiquitous dancehall/fete advertisements plastered on so many blank spaces, and her thoughtful responses re not telling only one side of the story (the violent and negative story) re Jamaica…or anywhere (reminiscent of Chimamanda Ngozi Adichie’s Danger of a Single Story)…and re how purposeful she became about seeking out the positive after feeling burnt out on the negative. There was also an interview with US-based Grenadian author Merle Collins – another interesting read.

“The night she tried to beat me, I slept on the veranda
of the shop in the square. At dawn, a man hauled
me home. She dragged me to school, whipped me
with the principal’s cane.”

…and ‘Leaving’ provided so much story in so few lines,

“On the way to Negril, police stop the car. Your father
stretches from the front seat, slides his hand under your skirt,
stuffs marijuana into your underwear.”

“ A single parent, my mother, sold snacks at primary my school. Giving teachers permission to beat me was one of the ways she endeared herself to them. At home, she’d beat me with sticks, wires, brooms, stones—anything within arm’s reach. When I was twelve, my father threatened to kill me if I failed to repay his one-off investment in my education. My mother compared me to him. At fourteen, I moved into my tenth home and lived alone for three years. Fortunately, I got help, but many of my peers did not. Some are dead.”

On the point of poetry, I also responded to Joël Diaz’s ‘Diablo, pon me candela’ which has some really beautiful language and sensual and poignant imagery

“We weave ourselves
away from the parade.
I reach for your hand
but we have yet
to escape our fears.”

St. Lucian Kendel Hippolyte’s interview was so reflective and his poetry was fire!

“Because you do not heed the voices of Imagination,
neither the tongues of trees nor the voices of poets,
earth will erupt in a conspiracy of poetry and nature.
Earthquake and landslide will snap and grind to rubble
your Baal-high idols of concrete and metal.
Fire will shrivel the pre-fabricated palaces
swelling like boils on our inflamed land.
Wind will shatter the thin cocktail glass illusions of our progress
into glittering dust scattering
over the ruins of casinos and the high-rise cemeteries made low.”

Seriously, I did not know where to stop excerpting; I wanted to share the whole thing. This one is ‘Fascioners of Progress’.

This one – with a similar longing, tinged by sadness instead of anger, at the things being lost to the gods of advance – is called ‘Windows’:

“They are becoming paintings –
Ma Fred, Miss Lala, Mister Walcott and the others
resting at windowsills, looking out of their windows
at the dogs, the cars, at a child following his fore-shadow
at something else beyond looking
– we have come to realize—at us now.
Composed, within their windows,
they are paintings that we frame, gilt-edged, in light
of all that we have come to since.”

Lou Smith is an Australian poet with partial Jamaican roots; I liked the imagery and the contrasts in her poem ‘Discrepancies’ and was drawn in by her re-telling, in her interview, of visiting Jamaica for the first time as an adult and searching (in 2010 during the State of Emergency)…for what bit of herself might be there, her grandmother having left there many decades before her own birth. Bahamian Marion Bethel’s poem ‘A Question of Love’, meanwhile, was quiet but deep.

“What gods will be unearthed
besides the billion dollar cabanas
on the ocean floor; in the end
rising tides had the last word.”

Lelawattee Manoo-Rahming’s poetry was incisive, sharp, precise like the cutlass it describes in ‘Dead End’. Also, loved her interview – soul baring and insightful as she speaks about the inciting incident for her poems – also she’s fearless. When she responds to a question about silencing in the Caribbean, all I can say is no lies detected (except that even with the increasing and increasingly vocal certainly around gender, there is still a lot of silencing around issues of race and gender but):

“Unfortunately, we, that is, Caribbean people, are still not able to fully embrace otherness. It is becoming easier for us to speak out against race and gender based violence, but generally we appear silent when violence is perpetrated against the LGBT community. As long as even one group of people is subjected to violence, there can be no healing, no progress towards a society free from violence, from trauma. Another area of violence that is most times not even considered to be violence, is that of the destruction of our eco-environment. Efforts are being made to sustainably develop our islands but in the main, most development is done without care and regard for the preservation of the environment. Our governments are some of the biggest perpetrators of this type of violence. The ‘creation of jobs’ is a silencing mechanism that can be quite effective.”

Fiction is always my favourite part of any collection of this type (because fiction is my favourite thing to read and write), and Belizean writer Ivory Kelly delivers with ‘A Different Kind of Beautiful’ – a beautifully ironic…and ultimately sad story, my favourite bit of which was the conversation between the girls – one time friends now walking very different paths, on the front porch/in the front yard, catching up. A quiet moment of normalcy, reflective of who they used to be, before everything goes sideways (again).
I’m glad I gave Devorah Major’s ‘Quilting the Moon’, a second look, because it is so good – a reminder that sometimes it’s not the work but the noise in our head when we come to it. Because the first time I tried to read this I simply couldn’t get in to it. I’m glad the noise quieted or I would have missed …

“Clearly no one but she heard the voice that was once silk to her but now brought with it the sound of a belt cracking against her legs.”

‘Red had closed her eyes and the tears bathed her face. Her mother had returned to her corner. Esther spoke, “We only open the door child. Return him his pain; it is his to heal. We heal you. Let him carry his actions.”’

The closing of the circle, the ending of the cycle of an abuse survivor and the women in her community exact their revenge through the act of quilting, turning this womanly art in to its own kind of obeah or karma. Reading it I was reminded of an interview elsewhere by Jamaican-American poet and artist Jacqueline Bishop about the stories to be found in these reconstituted scraps of fabric. Major’s interview likewise provided insight to the motivation for the story.

And that’s what sets this journal apart, I think, the way it challenges creators from the region to interrogate their motivations for the work they do and the techniques they employ in the doing, and in so doing interrogate the very state of their Caribbean societies. I know that for my part Adisa had me questioning if in writing ‘Zombie Island’ I had merely wanted to challenge myself to write a zombie story  (as I thought) or if there was, in so doing, some commentary, some searching for a logic to the surge of violence in Antigua. Both, as it happens, are true:

“…everything that happened in that story including a raging man banging down my door happened in life, though none of it, as is always the case with fiction, happened as it happens in life. My irritation with the politics is there as well, so it must have been political season when I wrote it. But mostly it was me wanting to see if I could tell a zombie tale at all, and then more specifically a zombie tale in a Caribbean space.”