(not a review really though, just some thoughts) 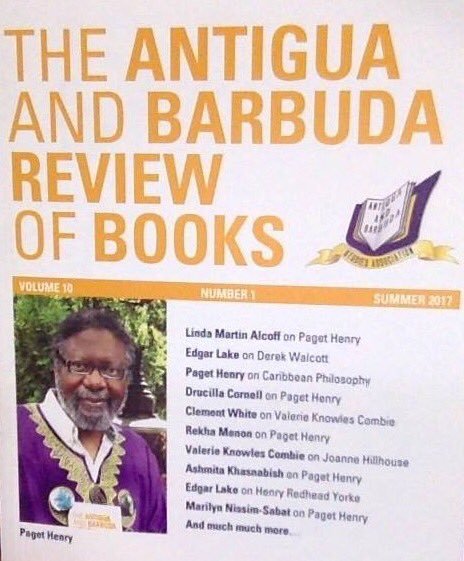 When I was coming of age, I’ve said this before, I was not aware of an Antiguan and Barbudan literary tradition – with the exceptions of calypso, and Anansi and jumbie stories i.e. variations of oral storytelling. One of the reasons I started the Wadadli Youth Pen Prize, in 2004, right at the start of my literary career was because there had been no environment to nurture my own writing and I wanted to be the change that I needed. For perspective, the first edition of my second book of fiction, Dancing Nude in the Moonlight, came out in 2004. I was aware of Jamaica Kincaid who I discovered in my teens; D. Gisele Isaac whose book I reviewed when it dropped in 1998 before she had returned to Antigua from New York where she lived; in the years between that and that Althea Prince also filtered in to my awareness. But awareness is not #fact necessarily and the #fact is there was a long dormant literary tradition, a dormant literary tradition that Edgar Lake spoke about at the first Antigua and Barbuda Conference in 2005. That same year I was involved in helping pull together content for a literary arts exhibition organized, I believe, by Brenda Lee Browne, at the Museum. That’s when I started doing my research and that research was the seed of the bibliography of Antiguan and Barbudan Writing that’s just kept growing and growing at the Wadadli Pen website, which has been online since 2010. The strands of this preamble – the Antigua and Barbuda literary tradition, becoming aware of one, documenting one,  and I can add critiquing one plus Edgar Lake inspiring people – come together in the annual Antigua and Barbuda Review of Books, because as Paget Henry, the editor and co-producer of the Antigua Conference, also an annual affair from 2005 on, has said and said again, that Edgar Lake paper was what inspired him to start the Antigua and Barbuda Review of Books. So you could say that from that Edgar Lake paper two projects that have added to local research, documentation, and scholarship were born.

And, so here we are with the 2017 edition of the Review. I try to write about the Review, as often as I get it, though writing a review of a review is very meta, because this is an important publication. Especially inasmuch as so little is done outside of it to research and document Antigua and Barbuda history, literature, culture, art, and society. In my last review of the review, I griped a little bit that it had moved away from strictly reviewing books to featuring academic papers on economics and other things. In part some of it was just beyond my interest or over my head, plus I felt it was crowding out the reviews.  But, you know what, it’s necessary, the more I think about it, to broaden the conversation. Especially as the conference itself sometimes feels like it exists in a bubble of very loyal attendees, but a small bubble.

This edition of the Review continues to have that expanded purpose with only a couple of pure book reviews. This is also a very Henry centred edition but not in a self-bigging-up way – in fact, this issue is guest edited by Lewis Gordon, Jane Gordon, Aaron Kamugisha, and Neil Roberts. But in a way that feels not only like the 70th anniversary of Paget Henry’s years  on this earth is a good time to assess the impact of that life, and in a way that explores the issues that have been at the centre of his scholarship.

Paget Henry, in case you don’t know, is (let me pull up this bio from the back of the book) professor of sociology and Africana studies at Brown University; author of Peripheral Capitalism and Underdevelopment in Antigua and Barbuda, Caliban’s Reason: Introducing Afro-Caribbean Philosophy, Shouldering Antigua and Barbuda: the Life of V. C. Bird, and the Art of Mali Olatunj: Painterly Photography from Antigua and Barbuda; editor of the CLR James Journal in addition to the Review; and just one of the big brains that Antigua has produced. It was at the 2005 Antigua Conference that I got a sense of just how many big brains and how scattered, not just in terms of geography and universities but areas of study. And if the Review has done anything, it provided and continues to provide a nexus for a meeting of ideas. Because brains can be big but without ideas and sharing, what’s the point; and one of the things I’ve come to love about Paget, something referenced by those who wrote about him in the book, is how interested he is in that respectful exchange of ideas, and how down to earth. I’ve never, in any of our many spirited discussions felt like he was going all I’m an Ivy league professor on me, though he easily could no doubt.

So, you’ll read a fair amount of that type of reflection from colleagues and former students and protégés in the first part of the 2017 Review. I enjoyed reading this part – it stirred a sense of fondness in me for the man behind the accolades, and schooled me on the things he would never brag to me or anyone about himself – his contributions to the evolution of an us-centered philosophy, to an understanding of us now as shaped by our history, our art etc. The realization that this man, youthful of spirit, who I am fortunate (inexplicably so) able to call friend is 70 – his milestone birthday occasioning the tribute – makes this collection especially timely. His reference in his tribute to Nobel literary laureate Derek Walcott and jazz guitarist Roland Prince in the collection are ample enough reminders that while some are lionized (Walcott), too often when you’re from a small place, the due you get is not equal to your talent (Prince). It’s nice to see Paget getting his due. As guest editor Lewis Gordon says, Paget, we see you.

“Each essay offers not only a portrait of Henry but also, through him, a sense of how large the impact a geographically small place can have on the world.”

I think my favourite article in this first part was Susan Lowes’ ‘Paget Henry: Paver of Paths for Scholarship in Antigua’, as it was a more personal reflection pulling from her field notes of their first meeting when their research in Antigua intersected in the way-back.

The collection takes a turn toward the creative with a mix of poems. Of these, though ‘An Evolution of Revolution’ by Lenin Jeffers was rich with pathos, especially in its use of rhetoric and the rage/pain coming through, the best for me was Ellorton Jeffers’ sparer ‘A Poem: (for those who thought 1979 the year of Antigua’s Revolution)’, which uses imagery to bring in to focus the fire of youth and revolution at a particular moment in Antigua’s history, a fire dampened with regret by poem’s end. ‘A Sermon on Death’, also by Jeffers, was a troubling but true read on the sometimes menace, sometimes benignity but ultimately implacability of death.

There was a section of research papers of which my favourite was Lake’s Barbuda, Henry Redhead Yorke, and the Field of Antigua and Barbuda Studies’. It is an interesting read – as most of his contributions to the Review have been over the years. Interesting, niche details that illuminate a formerly dark corner of our history. Lots of little details about colonial error Barbuda here (e.g. the Barbudans who were sold into war campaigns between England and her rivals…wow). Feels incomplete though…leave them wanting more indeed. His detailed post notes are just as interesting as the article itself.

As noted, there is a short review section – more reviews please! respect the title! – in which my own book (Musical Youth) is reviewed, and as if to prove how small this community is, the reviewer of my book is herself reviewed in this section. Meta brain explosion. All I’ll say about reading this section, it will never not be odd and uncomfortable reading about your own work (though I do because pulling and sharing reader reviews is part of my book promotion strategy).

The final section is focused on response to the Paget Henry reader and come on you know you’re dope if there’s a publication focused on your scholarship which is what the Reader is. The Reader is titled Journeys in Caribbean Thought and contains selected writings by Paget.

“Though constituting only a small portion of Paget Henry’s rich intellectual history, the works in this collection give us a window into the breadth of Caribbean thought – in turns, intersections (both in life and thought), and the distinct set of possibilities and knowledges that emerge from the periphery. The book also intimates just how complex this journey is, calling our attention to Caribbean thought as a multilayered, multidimensional perspective onto the world.”

So, this will be in universities somewhere if it isn’t already. I looked it up and was shocked to find that among the writings was Paget’s review of my book Oh Gad! from an earlier Review. To quote Wayne and Garth, I’m not worthy!

The book ends on a personal level with Paget thanking and responding to the people who’ve written about him, solidifying this edition of the Review as a love letter between respected peers.