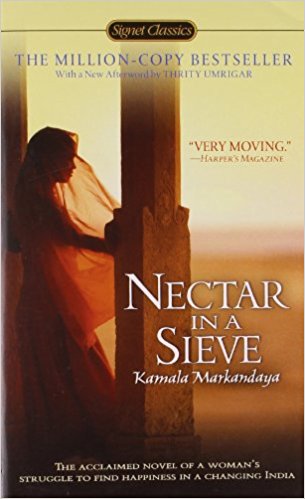 Nectar in a Sieve by Kamala Markandaya – Nectar in a Sieve is a very harrowing novel. Harrowing has a few definitions. It can refer to the tool used to break up and level land, to the process of drawing a harrow over the land to break it up, to becoming broken up by the process, and to disturbing and distressing the mind, soul, and spirit. All seem applicable.

Nectar in a Sieve is the story of poor tenant farmers who suffer doggedly, with faith and hard work, the harrowing of the land, and of their lives, as the world around them shifts. The story is set in India. But we don’t see India, we see the narrow contours of their lives within this larger India they don’t have the privilege of time or money to consider. How they suffer! And there are larger forces at play bu,t beyond praying to the gods, they don’t indulge in considering the reason or how to get out from under. They survive as long and as much as they can until they can’t anymore…and then they keep on surviving. In that sense, it is an unflinching account of poverty and family, but in as much as it turns a micro lens on a macro issue, it is also a novel about imperialism/colonialism and economic monsoons – the way a society adjusts from a hardworking, agrarian, communal paradigm shaped by familiar customs and rhythms to an indifferent, semi-industrial, anti-society leaving behind or crushing underfoot anyone who can’t keep up.

It resonated in a painful way.

Nectar in a Sieve, per the introduction, is “a seminal work in Anglo-Indian fiction”. It was first published in 1954 and, the introduction suggests, was a bit scandalous for its time, in its treatment of gender and more specifically sex – exploring, as it does, “the landscape of a woman’s body and the roles of daughters and wives undermined by poverty and threat of starvation”. The story is told from the perspective of a child bride who is one of the ‘lucky’ ones in that she makes what is ultimately a loving match.

‘“Have we not been happy together?” he asked.
“Always, my dearest, Always.”’

And it’s true. But happy is so relative and subjective – because it is also true that along the road to that moment, they’ve lost so much to their inability to control the circumstances of their lives – whether natural or economic or global; these things happen to them and they weather them.

I say it’s unflinching because the moments of greatest pain and loss are written in such glaring detail but, at the same, time with such beauty, such poetry in the expressive lines.

I struggle a bit with the takeaway from this novel. Plot wise it provides no great resolution, no defining closure, and I found the ending a bit abrupt. These people had brought me (close) to tears a time or two, and I wanted to know that they would be okay. But life doesn’t work like that, does it? It only assures that you are until you aren’t.
During one of the book’s periods of greatest suffering and displacement, of life kicking the characters though they’re already curled up on the ground, I had a conversation with someone. We were talking about women and the sexual corners they’re sometimes backed in to, the lack of bargaining power they sometimes have in the world; and we were talking about poverty and how it creeps up subtly, and about the woman and child I had seen sitting on the roadside earlier in the city, seemingly out of options (a projection, not a certainty), a scene unthinkable when I was a child. And the woman I had this discussion with, an older woman, insisted there was always a choice – even as I argued that choice is sometimes a privilege not everyone has. I don’t know that I believe that absolutely, I mean you can’t always control your circumstances, but you can control who you are within those circumstances. I know that’s what she was saying, in addition to asserting that the world was this benevolent place where help can always be found. But fatalistic as it sounds, I believe it a little more after reading Nectar in a Sieve. Because what choice does a mother have if her child’s screams of hunger are all she can hear and the land she works gives up nothing and there is no other work to be had. I would argue that to judge her, whatever ‘choices’ she makes in that situation – to beg, to starve, to sell her body – are not failings of character nor ours to judge. I would argue that such judgement, an indictment of those who make choices we believe we would not, comes from a place of privilege. Maybe we think we endured rough times and maybe we think it’s just a matter of character and overcoming. Well as counter-argument, I would offer up a book like Nectar in a Sieve. So maybe that would be one of my takeaways, to not judge another’s life or choices because she who feels it knows it.

This book deepened my knowing of Indian history and culture though a very small part of it and through a very specific point of view; it is also a novel of family and enduring…and a reminder that sometimes the most you can hope for is to be with the ones you love at the end of a long hard life.