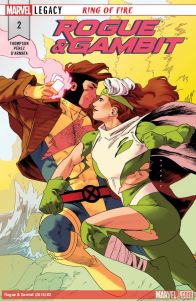 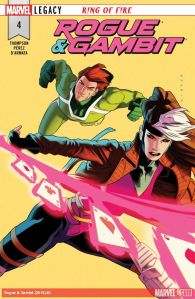 Okay, I’ll admit that part of that love is the longing that comes of

-not having read a comic in a long time

-not having read an X-Men comic (my favourites) in a long time (while suffering through movies that don’t do the comics justice for the most part – I mean, it’s gotten better and there have been some bright spots, hell I fangirled all through even the worst of them because when it comes to the X-Men I’m easy, but we could use an Avengers style intervention in the X-Men filmverse)

-not having read a series focused on my favourite X-Men couple ever (note – I didn’t say favourite character, that’s Storm, but I do love me some Gambit, so much I was/am on the lookout for that Channing Tatum Gambit movie, and love me some Gambit and Rogue – on the page only since they’ve both been horribly miscast and underserved in the films in my opinion)

and so we are here – a comic action, adventure, mystery, romance mini-series which puts these supporting players on their very own Fantasy Island (remember that show?) and in each other’s and the reader’s spotlight. Excuse me while I fangirl out for a bit.

-the chemistry is there as always between the Cajun and his Southern love interest (no that’s not right, Rogue is not simply someone’s love interest, she is equal parts badass, on the battlefield and in their nonstop verbal sparring, Bonnie to his Clyde)

-the mystery that draws you in (okay sure it’s not overly complicated, you can unroll your eyes but there was enough sketchiness about the too perfect location and the Mr. and Mrs. Smith style counselling sessions they went there for, enough mystery and misdirection as they investigated to keep the reader turning the pages to the reveal of the big bad…and then the reveal that the real big bad was really sorta inside them all along)

-the familiar touches (like Remy’s New Orleans accent and the flirty way he says “chere” and the will-they-wont-they-oh-they-did …? consummation of their love which given the ever present danger posed by Rogue’s powers I’m happy to see the writers troubleshoot)

-that the twist wasn’t quite what I was expecting (so, not as predictable as it seemed at least to me)

-that it does what X-Men has always done, raise deeper questions about our existence (usually about differentness but in this case the freaky nature of the fight mirrored the inner question, is it worth it to lose your most painful memories if the price you pay is  also losing yourself)

-my favourite panel, the one with the shattered glass reflecting all of their shared memories (and the art in general, the colours and the definitions, which is mostly effective, some nitpicks about the rendering of some versions of Gambit aside; but it’s possible I’m just not used to seeing Gambit so relaxed and mask off…plus it’s been awhile)

-while I like the hyper-focus on two of my favourites and on the complexity of an adult relationship in the comic book format, some of the wordy heart to hearts felt a bit much, slanting into sappy territory (more than felt realistic for these two)

But overall, I’ve been reading some heavy, serious stuff lately and this visit to a mysterious island for couples therapy, high octane action, and looove with two of my favourite X-Men was delightful.