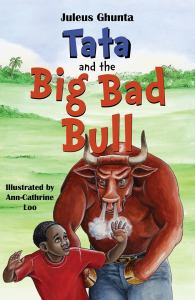 Juleus Ghunta’s poetry, what I’ve read of it, is typically darker – probing at the open sores of domestic Caribbean life – and typically from the point of view of the wounded child. This illustrated picture book, Tata and the Big Bad Bull, required a sharp mental shift for me; given the physically and/or emotionally violent imagery, and tonal edginess of what I’ve previously read of the Jamaican writer’s poetry. In this children’s book, the domesticity is there and the poetry, and the child, but this tale, appropriately, is considerably milder in tone and stakes. Sure this child is too poor to afford the fare to school but he seems well-loved and well-adjusted, and his determination makes him a good role model for the target market. The fable, which integrates humans and animals with human-like characteristics as part of the normal reality of the world of the story à la some of your favourite fables, is a tad on the traditional side. It’s up in the air how relatable the 21st century Caribbean child will find its classically pastoral imagery and simple, moral tale, both suggestive of a  more innocent time in the Caribbean imagination if not always in the Caribbean reality. But if lower primary school teachers and parents with young readers are looking for a culturally-relatable read-aloud or read-a-long with humorous cues– bunny, duck, and dog lined up with the children to catch the bus among the first of these; colourful detail -the bee at the entrance to bee hive tunnel and the crocodile with sharp teeth on full display at the foot of the bridge over crocodile pool- among them; and rhyming couplets and repetition of a certain key phrase, this could be a good pick. The fact that it’s about a boy, Tata, who feels an urgency to get to school makes it topically on point for that age group and setting as well.  There are no surprises here; after a few tries, the bully, literally the titular bull, who is barring Tata’s route to school, is overcome. The moral is in how he is overcome; not by confrontation or deception but by communication and trying to understand his point of view, and helping him if you can, which Tata could. After all, even the baddest bull in the pasture has a past and might just need someone to listen. A good message in the end; if we’re talking about people and not actual bulls. Which, given the genre, we are.

Full disclosure: Tata and the Big Bad Bull by Juleus Ghunta is published by Caribbean Reads which is also the publisher of two of my books – Musical Youth and Lost! A Caribbean Sea Adventure. Also I’ve liked and shared this author’s poetry in the past over on my other blog – even passed on the book announcement over there. When contacted to see if I would be interested in doing a review, I agreed with the  mutual understanding that it would be an honest review (I don’t know any other way).