Without a Summer by Mary Robinette Kowal 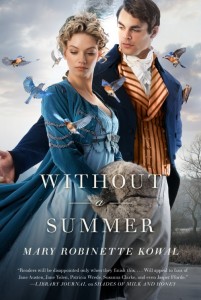 Previous installments in Mary Robinette Kowal’s Glamourist series reviewed on this site: Shades of Milk and Honey and Glamour in Glass

I have really come to fall in love with this series and Lady Jane and Lord Vincent – I lead with her because it is really her point of view, I mention them both because their partnership is really at this story’s core. That said there is a lot of plot. If you haven’t read my reviews of the previous books in the series, this is regency era England historical fiction with a twist, a fantasy twist thanks to the addition of glamour. But magic aside, it could be Jane Austen’s Sense and Sensibility, or more appropriately, Emma, since that is, according to the author’s note, the inspiration for this particular installment in the series. I must confess that though I read quite a lot of Austen in my Antigua State College years –she was required reading – and have seen several of the films since, Emma is not among them.

But this particular ‘adaptation’ finds Lord and Lady Vincent en route to London to begin a new contract, they are professional and well regarded glamourists. Jane’s sister Melody, who comes in to her own in his novel after being something of a shallow presence in the past – both in terms of her character and her characterization – in tow, as she needs to land a beau. So, it’s about her being out and about and trying to attract the right attention, and it begins slowly with these courtship rituals, as Jane and Vincent go about their work. Things speed up when Vincent’s father, a malevolent shadow in the past books, simply due to Vincent’s memories of him as communicated to Jane and his absence from both their lives, enters the plot, plotting. Yes, he is, as we’ve come to expect up to no good. I met Vincent’s father, interestingly enough before I read any of the other books because he figured quite prominently in the book I provided consulting editing services on – a later book in the series. He is truly a horrible human being but his actions actually force one of the most courageous acts in the book and brings Vincent some new insight re another family member. Ah Vincent, I love him more after reading this one – though for the first time I think, I disliked the cover as the models look nothing like Vincent and Jane in my eye, and especially so the admittedly handsome but too Ken doll like Vincent stand-in. The Jane stand-in may have seemed like an upgrade but I actually liked the imperfections of the model on Shade of Milk and Honey for the character. And Jane is full of imperfections in judgment in this installment of the Glamourist series. Her prejudices and her arrogance come out to dance, a licentious waltz, but as is the case with any of us who allow ourselves to be humbled and own up to our wrongs, she grows as a result. I love that through it all though, the chemistry between she and Vincent, even as their bond is tested, remains strong, and hot. Yes, in a book where there are a million euphemisms for sex, this is the most insight we’ve had to their bedroom activities and other intimacies and it is beautiful to behold. Even if some of the euphemisms did make me laugh out loud. One of the hottest moments all book wasn’t even in the bedroom. It involved Jane dipping out in pants for subterfuge and Vincent being affected in the most Vincent like way ever.

A little backstory – a demonstration is being planned by the coldmongers’ group (a body in which any oppressed group from enslaved Africans back in the time of the book to the more modern suffragettes and union activists and civil rights activists and Black Lives Matter activists can see themselves). Vincent and Jane find themselves in the mêlée, and then this moment happens.

“She looked at the barely contained chaos and turned to Vincent. He was staring at her with the strangest expression on his face. He blushed and looked away, wetting his lips. Still looking across the yard, he leaned down to whisper, ‘I was thinking about what my father would say if he knew that I found you attractive in trousers.’

Her coat seemed too warm, suddenly. She whispered back, ‘I do not care what he would say, if you like them.’

The corner of his eye wrinkled into his small private smile.”

Just think of Vincent’s inner dialogue as he looks at Jane in her pants as ripped from rapper Chingy’s discography “…I’m thinking home/just so I can see ‘em off/what the hell we both grown/wearing dem jeans like that will make me take trips with you to Rome” segueing in to a little Nelly “it’s getting hot in here/so take off all your clothes”. I jest but heat, meh say.

As you can tell, I enjoyed this book – it took me so long only because life won’t just let me read. I appreciate the level of research, the adherence to the era, the topicality, the character consistency and growth, the intrigue – these books are also well plotted and do not limit their concerns to the domestic space; and magic notwithstanding it all seems quite plausible. The post-notes about the history of the time – including the factual weather phenomena of 1816 as reflected in the fictional weather phenomena of 1816 – are also very interesting. My favourite bits – you mean, apart from Vincent sweating over Jane in trousers; any time Antigua gets a shout out always tickles me even if it does involve a criminal absconding here, but the bit I found myself sharing with a friend was about the waltz and how once upon a regency, it was the dutty wine of dances. Who knew? (Well, my friend did but, hey, I learned something new).