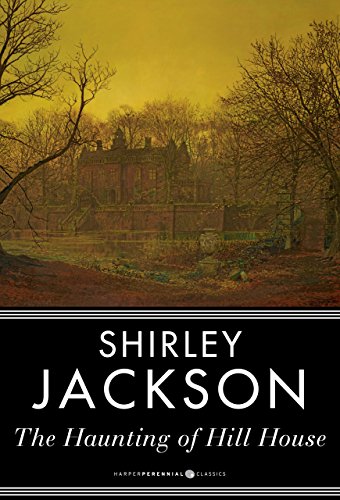 The Haunting of Hill House by Shirley Jackson (audio book)

I found my way to this book due to my surname. Yes, I became aware of a 1959 contender for America’s National Book Award and an indisputable horror classic because of the name that provided much fodder for teasing well in to my adulthood – seriously, as recently as this past year I received an email with a disparaging variation of my last name, allegedly by accident, but still it was said because why resist the urge to mock something that seems unusual especially if it’s attached to someone you don’t particularly like…right?

Back to the Hill House that matters here, the first thing of its author, Shirley Jackson that I ever read was the short story The Lottery which was … woah (seriously, read it). Then the Shirley Jackson house turns up in Jamaica Kincaid’s See Now Then which I reviewed here on the blog. So Hill House had been haunting me for a while before I got around to reading it. I think what finally prompted me to listen to the audio book was I wanted to read the book before the film or was it a series (released on Netflix in 2018) became a thing. As it turns out while I enjoyed the book, I was sufficiently spooked that there was no chance of me watching any thing (you have to forgive me I was raised on The Omen, Amityville, Poltergeist, the original Nightmare on Elm Street series, and every twisted thought to come out of Stephen King’s imagination, and I tapped out of horror a little while back – though I did watch and enjoy Get Out and A Quiet Place, even Birdbox, this past year or so but none of those were pure horror). Even though from the little I’ve read the Netflix interpretation is only very broadly based on the book, more of an inspired by than an adapted from.

But I can share that the book (which I didn’t plan to review but came across some notes I made while reading and it seems a shame not to share them) is worth a read. If you’re not easily spooked.

It’s never all out horror.

There’s a very subtle, slow build of the ominous atmosphere (not every horror has the patience to allow this to happen). It also has a touch of quirkiness/humour. Mostly through the fish out of water characters and the layered character insights that come of them coming together in this house, a character in its own right. The audio book readers were good by the way, making for the most rich audio ‘reading’ experience I’ve had since World War Z (which I also reviewed) – maybe some books just lend themselves better to that medium. These voice actors capture well the beauty of the language – and the audio book makes for a goosebump-raising experience if you have the time to close your eyes and just listen. I hated when I had to listen distracted.

From the beginning, the house itself and the way they describe the house seems deliberate/intentional. Right away things seem odd to  both the characters and the reader. And we are not disappointed – there is no blood and guts and gore, but lots of chatter and silence, and between the two, disorientation. There are 5 women by my count in the book, 8 characters overall – notably the heir to the property, the paranormal investigator, his wife, her friend, the immovable keeper of the house, and Eleanor and Theodora. There are no family connections, save for the husband and wife investigating the house – which I understand is different from the show. The two featured women – Eleanor and Theodora – were selected to be a part of the study into the house’s oddness because of their perceived connection to the supernatural and the house does seem to strongly impact both of them very quickly. There’s also a sense that the thing about these women, and one especially, character wise had less to do with the supernatural and more to do with a certain brokenness that whatever malevolence was at play could exploit. The house does seem sentient, which could be interpreted as something explicitly supernatural – actually there are some things that can’t be interpreted any other way – but also be seen as having to do with the very material matters of family discord and death by suicide in the house’s history.

In the end, there’s a sense that once it has ensnared your mind, you can’t really escape it – and for at least one of the characters, it ended quite tragically because of this.

You might be inclined to dub The Haunting of Hill House and The Lottery predictable (mentioned because of some reader reviews I’ve seen) now that we’ve seen variations of their plots in the horror fiction (on the page and screen) that have followed in the many decades since their release; but they’re classics for a reason and it’s important to remember that they were quite literally ahead of their time and that as a woman writing horror so was Shirley Jackson. And dated or not, they both still have the power to give you a chill.