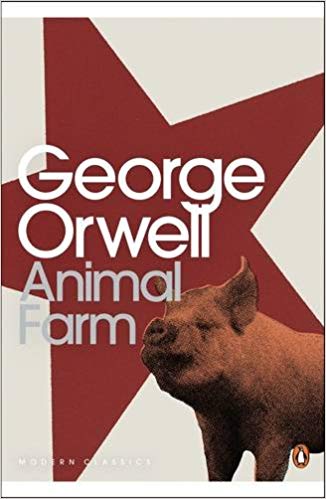 What an amazing book (why am I only now reading it?). It is an intentionally satirical allegory of communism under Stalin – the ideals of the Russian Revolution to the atrocities of Stalinism and beyond to the betrayals of the Revolution. It was written at a time (between 1943-44) when the author was concerned about the coziness between England/the West and Russia (a coziness born of the common enemy that was Hitler and Nazism). It projects the personalities of the key players in to animals on a farm. Needless to say, given the politics of the time, Orwell had a hard time getting Animal Farm published – its popularity likely grew during the Cold War, and I remember it being a school text, possibly of one of my older siblings (in the 80s).

It begins with the overthrow of the men who ran the farm and unwinds a tale in which the collective will of the animals is crushed under propaganda, the cult of personality, fear, and ignorance (some of it willful).

The intentions of the rebellion are noble – the oppressed underclass (the animals) rise up against their takers and abusers. This is inspired by a vision shared by an elder boar, the Marx or Lenin or both of the tale, who shortly after dies. It starts with a spontaneous act (when the fed up animals run off their drunken master, his lazy farm hands, and his ‘know when to run’ wife). Two leaders, Snowball and Napoleon – respectively the Trotsky and Stalin of the tale, both pigs, with wildly different philosophies, emerge.

Things are utopic at first and the animals even fend off efforts to quash the rebellion during the fabled Battle of the Cowshed (a name which made me smile every time it was referenced). The heroes of the Battle of the Cowshed are Snowball and Boxer, a horse. They become two of the book’s more tragic characters. Snowball is run off by Napoleon (and his loyal and fierce dogs). Napoleon later co-opts Snowball’s bravery (in the Battle of the Cowshed) and idea (the building of a windmill that Napoleon opposed) as his own, and blames Snowball for everything that goes wrong thereafter (including the collapse of the first attempt at a windmill, the failed crop, you name it). Snowball is never seen again but he becomes the big bad other – moreso than the man they initially rebelled against. Boxer, a loyal worker who never questions Napoleon, is literally taken away to the glue factory when he is no longer of use. They are threats to Napoleon’s rule (Snowball because of his brains and influence, Boxer because of his strength – not even the dogs can cow or best him) and are dealt with accordingly.

None of this happens overnight – it never does. But in time consensus rule is replaced by edicts with only some quickly drowned (because there sheep, of course, literally and figuratively) minor quibbling. Thanks in great part to the dis-information minister, a pig named Squealer (stand-in for Stalin’s head of propaganda Vyacheslav Molotov). One of the book’s more interesting elements for me – a warning for us still – is how facts are twisted until new truths are written into the collective history; how frustratingly insidious the process is but not without transparency – because there is some culpability on the part of the people who eat what they’re fed without question. Then again those who do question and/or rebel are killed cruelly – some confessing to sins they assuredly did not commit, referencing the Stalin purges and related “show trials”. The propaganda Jedi mind tricks people into accepting the incremental withdrawal of their rights under animalism (effectively their human rights). Eventually after a time, there are young ones who either never knew those rights (never knew anything but the oppressive state in which they live) or old ones who no longer question it. For a self-described fairytale, Animal Farm is bloody and chilling, but not without humour (even as the story itself fills you with dread).

In it, I hear references to slavery and resistance, and the conditioning that makes some fight resistance (like the horse lured away by sugar cubes and ribbons); and references to modern day politics – strong men and masses who absorb the real fake news (e.g. a doctored Pelosi video) unquestioningly.

The book cautions that the seeming liberators will soon walk (upright, as the pigs do by the end of the book) among those with whom they once claimed kinship – touching on elements of classism. We have seen this play out again and again, and may be seeing it do so again (our various countries in this time) – and it is not clear, honestly, if we are sheep, pigs, snapping dogs, selfish cat both-sides-ing it, hens (who make a stand but are eventually made to sit), the stout horse, or the seen it all donkey. Who are we in this history currently being written in the place where we stand (as rights are trampled)…are we even paying attention…this is something the book challenges us to ask ourselves, while entertaining us (because it is an entertaining read…or, in my case, listen).

Animal Farm is a classic not because it is old but because, irrespective of when it was written, it is in many ways still current.

The main page of my Blogger on Books VII can be found here.  Other pages are sub-linked from there. To check out my books and see what reviewers and readers have been saying about them, go here and here.