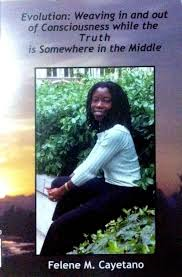 Evolution: Weaving in and out of Consciousness while the Truth is Somewhere in the Middle by Felene M. Cayetano

This pocket-sized book with the big title (which as I type this seems apt descriptor for the author herself) was an engaging read. Because it’s a collection of poems you never really feel like you’re losing your place even if, like me, you read it in stops and starts. More grounding than that though was how the poet tagged each poem with a date, maybe even a time, where she was, what she was doing, what she was thinking about, or what inspired it so that it read like a journal (and, yes, that some of it reads like a rough journal entry rather than a polished poem is a side effect of that) rather than your typical collection.  It read more like notes to self unmindful of the reader who might come later to make sense of it. But because she took the time to do so, it made sense always; so much so I leave it thinking that this journal could be re-ordered without much hassle in to a screenplay of a young African-Belizean-Garifuna woman’s Beginnings – a more nuanced Sex and the City, say.

So, yes, as you guessed from that last note, it deals with romantic relationships (e.g. ‘Hey…You’, ‘Love Potion #1, Love Potion #3 etc etc etc) and search for individual meaning within the American cityscape of a Gen X-er, but with Caribbean roots and all that comes with that. She herself described it in her intro as a poetic autobiography and that it is and though poetry is the camouflage so to speak (the funnel through which we filter experience) it’s very brave of her to allow herself to be vulnerable by pointing to the where and when of the spark – often those specifics, for me anyway, get obscured by the time the poem is out in the world. That she left in the lumps and the pulpiness made for a richer experience as we almost voyeuristically watched this young woman wrestle and come to terms with herself and her lineage.

I tried to keep track of my favourites but there were a lot of favourite moments if not always poems in their entirety as her verse sometimes had that pop in the head effect from when something connects in a profound or relatable way.

What do I mean by profound? It’s subjective, I suppose, but for instance in the Puzzle when she writes, “Life has a tendency toward routine/a routine so simple we forget the goal”, you might go hmmm…for real.

What do I mean by relatable? Like I must have written some version of A Writer without a Pen at some point in my writing life, it’s the kind of thing you write in the early years of figuring out your voice as a writer; there must be some version of Vain in my archives as well (love it!). Relatable like when, on reading, Losing a Friend, I feel like someone gets what I’ve been feeling these last few years on losing one of my best friends – a friendship of many mutual confidences that is still a deep aching loss. “Losing your friend/is like losing a piece of your self/No one notices…” – this is so true; I also like the imagery she uses “Losing a friend/is like losing the clasp from your favourite necklace./Replacing the clasp is never the same/and leaving it alone/makes you think too much”.

I like the balance of concreteness and elusiveness in some of her imagery like you can see it but through a bit of a haze. She adjusts her depth of field with deliberateness.

Repetition is another recurring  device, the tone deepening in its questioning from one repetition to the next. Her poems, also, have a feeling of moments yawning in to the kind of inner musings that we do especially at that time of becoming – meaning moments always searching for deeper meaning. Moments we might look back on cynically a decade later shaking our head at our younger selves, like, sis, it’s not that deep.

One thing that sets Cayetano’s collection apart is the Garifuna (a mix of African and the indigenous people of Belize and some other places in the Caribbean) connect largely filtered through her recollections of home and family, particularly her elders, and through their deterioration her commentary on the erosion of indigenous culture. Erosion not erasure because someone like her is still there, giving it voice, treasuring it, giving it life.

Every writer has a poem that defines who they are and their journey to a point, a poem that can become their signature (that might be Ah Write for me) and for Cayetano, I think that might be After I Die in which begins, “My biographers will never have to wonder…” and in which she breaks down the parts of herself and pastes them in to a whole that maps her in her entirety (even as it acknowledges that people will still speculate because part of the danger of putting things out there is you invite more questions).

Evolution is by turns gentle, lost, purposeful, angry, amused, not amused, the full and colourful range of the complicated process of being as a young black indigenous woman in the world. She ends with a full alphabet of haikus at least one of which made me laugh out loud and a biographical note (Words -a personal essay) that after all she’s shown us may have been unnecessary, strictly speaking.

The main page of my Blogger on Books VII can be found here.  Other pages are sub-linked from there. To check out my books and see what reviewers and readers have been saying about them, go here and here.