I do these Quick Takes for books for which I won’t be doing a full review but might still have something to say – this is the 2020 Quick Takes page.

Creole Clay: Heritage Ceramics in the Contemporary Caribbean by Patricia J. Fay – I don’t have a copy of this book which is largely why it’s DNF but someone sent me the excerpts that referenced the Hillhouse family in Antigua – and I read an excerpt on my Instagram that I wanted to share with you. I’ll also share that one of my books was referenced – “Antiguan and Barbudan author Joanne C. Hillhouse is Hyacinth Hillhouse’s niece, and in her 2012 novel Oh Gad! she uses the metaphor of the fragility of a dropped coal pot to frame the emotional crises faced by her protagonists.” Among my favourite bits though reference my grandmother, called Mama, Elvie Steven (1917-1987), recorded in this book as “a central figure among the many women potters in Sea View Farm…she was the mother of 10 and four of her five daughters would go on to work in clay” (or muddy as they call it).  …Herself the daughter of potter Anna John, Elvie Steven had ten children, five of them girls, and although she made it clear that she did not want any of them to take up the tough, dirty job of making pottery, four of the five did so anyway. Hyacinth remembers how she waited for her mother to go to market one Saturday so that she could try to make pots on her own, and after seeing the coalpot that she had produced her mother gave in, helped her finish it, and did not question her choice again.” An interesting social detail that this book, which looks at traditional pottery making in several Caribbean islands, reinforces is that it was largely woman’s business. I remember my dad saying that the boys didn’t make pots really though they would help with getting and picking pebbles from the clay, also loading the pots on the donkey box and travelling to other villages to sell. I’ve learned things about Mama that I didn’t know from this book. I knew her as a hardworking woman for whom coal pot making had been the work of her life and who died when I was still too young to really really know her. It’s gratifying to see her as a part of this book (wonder how she’d feel about it)… I have to thank historian Susan Lowes for the excerpt. My family needs to get its hand on an actual copy.

Small Island by Andrea Levy – stage adaptation of the Orange Prize winning novel – the story as presented on stage is a revelation about the treatment of Black Caribbean soldiers during WWII – as with the Vietnam War and Black American GIs in Spike Lee’s Da 5 Bloods recently reviewed on this site, I’m glad it’s being told in the mainstream (we’ve always known though perhaps not like this); and about the Windrush Generation (literally people from the British West Indies travelling on the ship ‘Windrush’) which went over to rebuild England post-war and build a new life for themselves and the racism that greeted them there; about culture clashes and the white woman (well meaning though she doesn’t always get it right) who took them in to her home – her life and dreams and one great love and sacrifice; about classism and colourism, and overt and polite racism. Frustration is a feeling you’ll have often as you watch (or read) this but you’ll also laugh and hope and dream with and for the characters – all very imperfect and sometimes unkind  and oblivious in their own ways. And as they delight and frustrate, their narratives speak to our intertwined history. Heavy as I make it sound, it’s a delight.

Girl, Woman, Other by Bernadine Evaristo  – 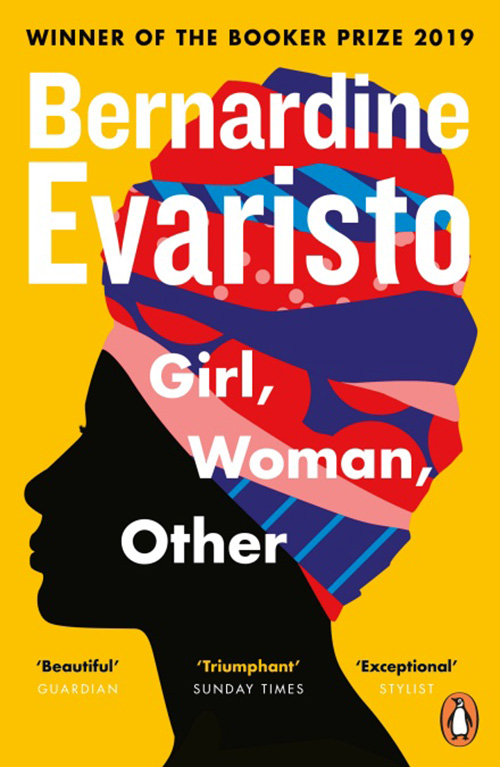 This Booker Prize winning book was already on my to-read list and I still plan to read it. If anything, I’m more eager to read it after listening to the abridged version on the BBC.  I didn’t know a lot about the structure going in, only that it was the story of women from different walks of life and of different generations. It is that. These Brits of different race, class, gender identification, countries, ambitions, and generations is, the easy word to reach for here would be compelling, and it is that. But what is compelling about it? The distinctiveness of the voices, yes; but also the particular-ness of the voices (accents and all) and the immersion in to each point of view; and, that it centers and presents their stories, immigrant, Black, working class, transgender, lesbian, assault survivors, women doing irreverent things and making hard choices, with breadth, insight, and compassion; also, the overlapping nature of their stories – it literally has the “small world” feeling; and yet even with that the realization/reminder that mother-daughter-lover-sister-friend we don’t really know each others’ stories, not fully. We’re different people to different people, not in a deceptive way but in terms of how the relationship is defined, your mother doesn’t necessarily know the you your girlfriends know, your girlfriends don’t necessarily know the you, someone else knows or think they know, and so on. No one knows our full story really, only the parts they’re told or bear witness to and that filtered through their point of view. I think of the interaction between former student and former teacher, Carol and Shirley, at a play, awkward due to what neither woman fully understands about their former interactions, what they will never fully know about each other. I can relate to this. It is one of the more frustrating parts of interpersonal interactions – the loneliness of it. Sometimes you form a bond that feels like someone knows you as well as anyone can, and for whatever reason, death,or in several cases in the book, they leave, and you are alone. Your efforts to connect with others making you feel more alone. But this is not a dour book. The stories are interesting and full of surprises – one was a particular doozie for me, and another a sort of poetic justice.

PEN America A Journal for Writers and Readers #18 In Transit (2015) – I’ve written about this here on the blog before finishing (so pardon me if you’ve heard this before) but in a nutshell: Yes, I have a poem in there. You can read my joy and lamentation about that in the linked post. But I wanted to touch again not so much on some of the pieces I liked (e.g. Yannis Ritsos’ Diary of an Exile, translated by Karen Emmerich and Edmund Keeley), even the fascinating unusualness of some of the pieces I liked (Father’s Last Escape by Bruno Schulz, translated by Celina Wieniewska), but on the creators (Mana Neyestani – an Iranian Metamorphosis, translated by Ghazal Mosadeq and Natalie Diaz – How to Sacrifice Your Brother When He is An Aztec) of whom I’m happy to now be aware. Diaz and Neyestani were my favourites and I will be looking out for more stuff from them, Diaz especially. They were both wrenching reads, digging in to my core in the way you want art to, even when it hurts. Neyestani’s piece used images to illustrate the horror of artistic and journalistic suppression/oppression while Diaz delved in to familial truth telling, and its possible backlash. I found a point of connection with both though far removed from their circumstances. This is a literary journal and one of the fun things about literary journals is finds like these as you are introduced to the works of several writers in a single book.

Buzz and Bingo in the Monster Maze by Alan Durant and Sholto Walker – a pretty straightforward lost in a maze en route to a monster mash tale – which had me humming monster mash in my head about halfway through. Part of the Collins Big Cat series of picture books for children two of which I did Quick Takes on in 2019.

Back to the Blogger on Books VIII 2020 main page