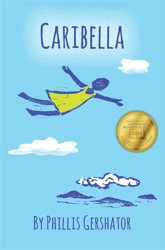 Caribella by Phillis Gershator – I’m mad at ALL the adults in Caribella. In a nutshell, Caribella is the story of a delightfully imaginative, smart, and adventurous young girl who goes to live with her father after being taken from the elderly relatives who had been caring for her from birth. They die without her ever seeing them again though she holds their memory and the love they showed her, and the wisp of a lullabye song by her long deceased mother, in her heart. She needs it in her father’s home – or rather in the shed at the back of his home to which his wife relegates her. Technically, the wife is the villain of the piece for she never accepts Caribella in to her home. In her father’s home, Caribella goes hungry, and feels unloved and unworthy, all of it re-enforced by her step-mother’s actions toward her – from verbally abusing her, to leaving her without, to beating her for infractions real and imagined, though really for existing. And here is where the technically comes in, because Caribella’s existence is a reminder that her husband, Caribella’s father, had an outside woman with whom he had a child. That’s why she hates Caribella, and while we are made to hate her for her outright badmindedness, this reader can’t look the other way on the male privilege that allows Caribella’s father to do as he likes without consequence – to the point where he doesn’t make an effort to incorporate his daughter in to the home even knowing the bitterness his wife must feel, he just doesn’t want to be disturbed. So, Caribella suffers as much from his wife’s actions as from his inaction. But I’m also not giving the other adults a pass – and here you can side eye me for being a bit judgey but for them not to take action on Caribella’s behalf when there are enough hints of what she’s going through to me is willful blindness (of the kind we engage in in society, so maybe I’m judging us all, myself included). Take the father’s brother, the uncle, who visits; it can’t miss him that Caribella is only invited to sit at the table and eat because he is there, that she lives in a shed outside of the house – and even if it did, all he would need to do is read between the lines of the letters Caribella sends him (an excellent device for advancing the narrative  by the way); but does he do anything with his suspicions, like tell his brother to do better? There’s no evidence of that. The teacher who is the most sympathetic adult in Caribella’s reality eventually takes action but for all that she witnessed before that I can’t help wishing she’d taken action sooner – it’s somewhat ameliorative that she has recently suffered a loss in her own life and in that scenario Caribella is only a small part of her problems and perhaps her hands feel tied even when she realizes the abuse Caribella is experiencing at home. Caribella herself explains why teachers are reluctant to get involved. She’s a pretty astute child. And, in many ways, Caribella saves herself in great part because she knows how to use her voice to write and to spell and ultimately to talk back (she may live in her head a lot but she’s not at all passive); she has a rich imagination that works overtime to insulate her from the harsh realities of her world. Caribella’s voice, what the author has done with placing the reader firmly in her point of view, and keeping her perspective that of a child, and this particularly sensitive and strong and inquisitive and imaginative child, helps us to feel deeply her sorrows but also to be buoyed by her irrepressible spirit. It’s good insight to the struggles of children in her situation. We’ve had a spate of runaways in Antigua these past few years and as I think of Caribella, who does run away at one point, I can’t help thinking of them and the many worlds inside the world of a young person, the things they’re going through that we must learn to see and when we see act, as adults. Caribella is an engaging story which moves fluidly between past and present, lore and the unravelling narrative of the main character’s life which has the potential to be its own lore, reality and non-reality/fantasy, and manages to be fairly light in tone (in great part because of voice) in spite of the rough reality of Caribella’s life. A good read for both adults and young readers – I would say middle primary up.

Full disclosure, Caribella is published by Little Bell Caribbean, the same ones publishing my book With Grace. It had no bearing on my judgment – per my book blogging protocol, rather than purge my conscience, I probably would’ve just said nothing (i.e. not blogged about the book at all) if I had nothing good or constructive to say. Also, I’ve read and reviewed (well, had my nephew who I read them with, review) two other Little Bell titles in summer 2016 – they are Broo ‘Nansi and the Tar Baby and Brown Pelicans. Click on the titles to read those reviews in Blogger on Books III.

The main page of my Blogger on Books IV series can be found here. To check out my books and see what reviewers and readers have been saying about them, go here and here.