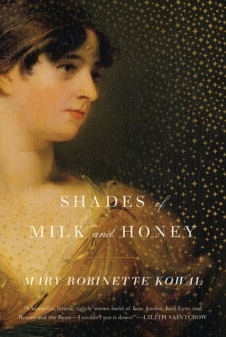 If, like me, you read some Jane Austen novels in college where she was required reading and liked them but have never really returned to that time in your recreational reading (though you do count 2005’s Pride and Prejudice among your favourite romantic films), Mary Robinette Kowal’s five-books-deep glamourist histories series might be the place to start – especially if you’re also a fan of speculative fiction. Isn’t all fiction speculative, you might say. But I’m referring to that particular strain in fiction that is unhinged from reality as we know it. We’re talking here of the sub-genres of fantasy, science fiction, magical realism, and even fairytales (like my recent release With Grace ). In these types of books, the rules of the world often differ vastly from the rules of the world as we know it – maybe magic is real, maybe dragons exist, maybe there are alternate realities. And on that point, this area of writing can also include alternate histories where history is acknowledged to a point but then veers off or where within the historical space we know there is some bit of differentness.

The latter is the case with the  Kowal books (of which I’ve so far read only two) as they are set in historical Britain, specifically the time in which Jane Austen lived and wrote. And so you will find in Kowal’s book, characters not far removed from Elizabeth Bennett (Pride and Prejudice) or Anne Elliot (Persuasion) and the concerns and sensibilities of their world. But in addition to concerning themselves with manners and snagging an appropriate match, there is magic, normalized. Included among the arts is weaving glamours – it is as normal a skill as any of the arts (piano playing, for instance) we might find the women in an Austen novel engaged with. Glamours are multi-dimensional paintings that can be used to reveal and/or camouflage things. Like a tableau, they graphically capture a scene, but with a suggestion of movement. In fact, there is an intimation in Shades of Milk and Honey, the first book and my second read in the series, that they are not unlike motion pictures except that they cannot be recorded or transmitted beyond their immediate audience – though if tied off, they can, it appears, be held indefinitely, as we see one Lady in the book use the glamour to pretend a beauty she doesn’t possess and another to pretend a wealth she no longer possesses. Glamour is also a bit like magic-magic, you can use it to obscure things or even people; and in one neat trick we saw how it could be used as surveillance equipment to overhear and possibly record a secret conversation undetected.

But at the heart of it, 2010 release Shades of Milk and Honey is about the pre-occupations you find at the core of a lot of these Regency era stories whether Austen’s beloved novels or, more recently, the 2013 film Belle based on the 1779 painting of Dido Elizabeth Belle, a real life girl of mixed race, free and a member of society at a time when most Africans in the West were enslaved. We’re talking here about the Regency era – late 1700s to early 1800s – a time of great change in some ways (or changing ways as seen in the Dido story which has as a major sub-plot a real-life groundbreaking case in the dismantling of slavery), great art and beauty, great horrors given what this society was built on, and, as exemplified through the pages of Austen’s novels, great privilege and stratification along class lines. And yet, these novels are in a way all about the search for love – their major pre-occupation may be the search for an appropriate match, one endowed with wealth and Name, but for the heroines of the novels, the big D, desire is a match appropriate to their heart.

And so in Shades of Milk and Honey we meet Jane (her name perhaps a nod to Austen). I mentioned before that I’d read a later Kowal novel. In fact, the way I know of her books and ended up with all the books in this series is due to me being hired to provide editorial input on a later book in the series, 2015’s Of Noble Family, largely set in my Antigua – well not so much my Antigua as Antigua in the Regency era. Having worked on a later book in the series, I knew how this particular love story turned out – so there was no particular tension for me with respect to Jane’s respective non-suitors (you’ll need to read the book to see why I say non-suitors). Still, though I knew what I knew, knew Jane’s happy ending as it were, Kowal wove the plot so well, I was turning the pages at points anxious for my heroine. Yes, this was a page turner for me – the characters, especially Jane and the Darcy-stand-in here were compelling; their awkward dance made no less so for me knowing the outcome of their romance. Plus, she throws in the stock characters – the buffoon, the neurotic mom, the snooty lady, the cad, the lovelorn and easily duped – familiar to readers of Austen but infuses them with enough newness as they play their roles as the small intrigues of society play out. Beyond that, the language and even the pacing of the novel feels of that period, as if Kowal was a contemporary of the great author and not someone modelling her novel on that time. I suppose the major challenge there would be how not to make her heroine too modern – and she doesn’t, no more so than Anne  and Elizabeth are modern for their times. There was one climatic action scene that felt farcical to me, and confusing enough that I had to re-read it, but for the most part it was forward action, at a much faster clip than the Dunkirk’s grey mare (read the book, you’ll see what I mean).

Also interesting to me is the way the explanations of how glamour works are woven in to the plot and even used as a plot device in a major budding romance – it’s an interesting way of exploring where technique ends and instinct takes over in creating (and appreciating) living art.

Looking forward to reading the others in the series.

The main page of my Blogger on Books IV series can be found here. To check out my books and see what reviewers and readers have been saying about them, go here and here.